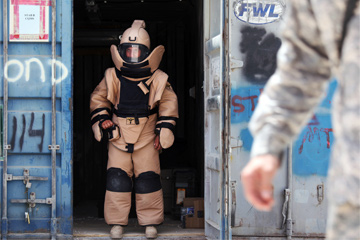 A member of a U.S. Army Explosive Ordnance Disposal (EOD) team stands at the entrance to a container before an exercise in Kandahar City, Afghanistan, on June 15, 2010.
Ed Jones/AFP/Getty Images

Unexploded ordnance, or UXO, didn't emerge as a serious problem until World War II. Those bombs turning up in Berlin and London today began as delayed-explosion bombs dropped from Allied and Axis planes between 1940 and 1945. Here's how it worked: Some bombs exploded on impact. Others carried timers so that they would detonate several minutes or hours after hitting the ground -- after soldiers ventured from their hiding places. The clockwork mechanisms frequently jammed, so that the devices remained in their craters or in rivers, lakes and ponds, still packed with deadly explosives. Suddenly, unexploded ordnance was a serious problem demanding a new kind of expert.

In America, the military first took a fragmented approach to developing explosives expertise. Beginning in 1941, the Army managed its bomb disposal operations and training from the Aberdeen Proving Ground in Maryland. The Navy's program was headquartered at the Naval Gun Factory in Washington, D.C. In 1947, responsibility for all explosive ordnance disposal, or EOD, was given to the Navy. By the 1950s, the unique skills of EOD specialists were in high demand nationally and internationally. To better train bomb techs and equip them to deal with increasingly sophisticated and varied threats, the Navy moved its EOD training to Florida's Eglin Air Force Base in 1985.

Today, all military bomb disposal operations are centralized at Eglin, and bomb squads are deployed to support U.S. troops around the globe. In Afghanistan, for example, EOD specialists actively hunt for IEDs left by insurgents, blazing a trail for soldiers to follow. Kathryn Bigelow directed a fictional account of one such solider and his dangerous work in 2009's "The Hurt Locker."

In addition to metal detectors, electronic jammers and other old-school tools, these specialists use a number of new technologies to detect buried explosives. These include the Minotaur, a remote-controlled front-end loader with a nose for pressure-sensitive bombs, and line charges, long ropes studded with small explosives that can blast a narrow footpath and reveal tripwires and other hidden threats. Many EOD teams also cruise the rugged terrain in mine-resistant ambush protected (MRAP) vehicles, armored trucks designed to shield occupants from the shrapnel and shock wave of an accidentally tripped IED.

In nonmilitary situations, it's impractical to actively hunt for threats. Most discoveries of unexploded ordnance come from construction crews during excavation, homeowners who find an old stash of ammunition or fireworks or, in the case of explosives left by terrorists, vigilant civilians. When such a discovery is made, public safety bomb squads, or hazardous devices teams, typically respond. In the U.S., although these teams may be located in state or local law enforcement agencies, they generally receive their training from the FBI, which offers a national accreditation program. Every FBI field office also contains at least one special agent bomb technician, who has received extensive training at the FBI's hazardous devices school located in Huntsville, Ala., at Redstone Arsenal.