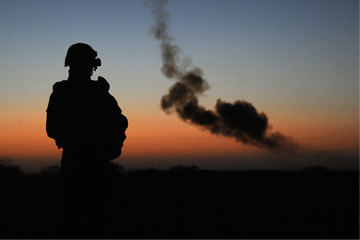 A French soldier watches a controlled explosion of a homemade (artisanal) bomb and other munitions by a bomb-disposal expert on Feb. 14, 2013. The French army found the bomb in northern Mali.
Pascal Guyot/AFP/Getty Images

In Europe, World War II ended on May 8, 1945. The horror of the Blitz and other massive bombing campaigns, however, continues to haunt people in Berlin, London and elsewhere today.

A typical scenario goes like this: During a commercial construction project, workers uncover a bomb that failed to explode when it fell from the belly of an enemy plane decades earlier. Even though the dud seems inert and harmless, it's not. Depending on the bomb's size and construction, government officials may evacuate several blocks, or several square miles, in case the unexploded ordnance decides to, well, explode. (Ordnance is a general term for military supplies that covers things like ammunition and weapons.) In November 2011, the city of Koblenz, Germany, evacuated 45,000 people when a 4,000-pound (1,814-kilogram) British bomb was discovered in the Rhine River [source: Curry].

But getting people out of harm's way is just the beginning. Next, bomb squads must evaluate the device and decide what to do with it. Sometimes, they defuse the bomb, move it to a safe location and then detonate it. Other times, they blow it up where it rests.

These scenarios are more common than you might think. In Berlin, more than 2,000 explosives have been recovered since the end of World War II, but experts believe that as many as 4,000 more remain to be discovered [source: Curry]. And in British cities such as London, Manchester and Plymouth, construction companies use maps to identify the approximately 21,000 locations where there could be unexploded ordnance dropped by the German Luftwaffe [source: Copping]. Did you know that 200 such devices could be lurking beneath the London Olympic Park, site of the 2012 Summer Games [source: Copping]? Or that construction had to be halted after a 2,200-pound (1,000-kilogram) unexploded bomb was found at the site [source: Copping]?

Then there are modern horrors, such as improvised explosive devices, or IEDs, in Afghanistan, as well as pipe bombs, pressure-cooker bombs, car bombs and suicide bomber vests. All of these weapons, if bystanders or surveillance crews are lucky enough to discover them before they explode, must be rendered safe or interrupted before they detonate unexpectedly and without necessary preparations. You might think the most successful disposal procedures produce no explosion at all, but in reality, many call for carefully planned and intentional explosions -- what experts call controlled detonations.

Only highly trained bomb squad technicians in civilian law enforcement agencies, or explosive ordnance disposal personnel in the military, conduct controlled detonations. It's a delicate, hair-raising business that usually ends in triumph, but can, in certain circumstances, end in tragedy.

Let's enter that world now to understand the strange and oxymoronic event known as a controlled detonation.