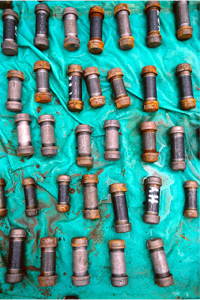 The makings for pipe bombs that once belonged to New Hampshire gunman Carl Drega.
© Ed Quinn/Corbis

Once bomb disposal experts have thoroughly evaluated a device, they follow "render safe" procedures to make sure an explosion doesn't harm civilians or soldiers. Ideally, they prefer to dismantle a bomb completely, separating explosives from electronics and other components, so they can analyze how it's made. This information then becomes part of an ever-growing bomb disposal knowledge base, which can help technicians on future encounters. But dismantling a device isn't always the most practical or safest solution. Sometimes, the experts opt for a controlled detonation -- the fighting-fire-with-fire approach.

Before we go further, let's get a working knowledge of bomb anatomy going. Although bombs, especially IEDs, can take many different forms, they possess four main components:

Dismantling a bomb requires that these different components be teased apart without causing the main charge to explode. Controlled detonation represents a different strategy. Instead of trying to prevent the device from exploding, bomb disposal teams initiate an explosion on their terms, so they can take control away from an enemy or terrorist group.