Of Duds and Destruction: Potential Threats 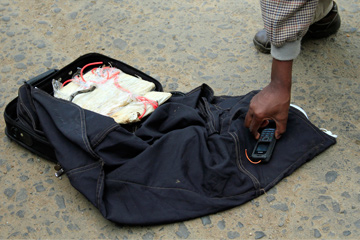 A police officer handles a defused improvised explosive device that was found in a public bus in Nairobi, Kenya on March 31, 2013. The IED was ready for detonation when the 25-sitter mini-bus crew discovered it wrapped in a bag, witnesses said.
© Thomas Mukoya/Reuters/Corbis

Today, EOD specialists face an enormous variety of threats. Bomb makers build their weapons in every size and shape imaginable and experiment with a multitude of designs and explosives. Disposal teams must be able to recognize -- and remember -- a vast amount of information so they can evaluate and neutralize a device before it explodes. To get a feel for the type of threats an EOD specialist faces, it helps to take a crash course in bomb basics.

An explosive is any device that produces a rapid and violent expansion of gases. Chemical explosives allow a combustible material to mix with oxygen in a confined space and in an extremely brief period. This combustible material comes in two basic flavors -- detonating, or high, explosives and deflagrating explosives. Trinitrotoluene (TNT) and nitroglycerine are examples of high explosives. They decompose violently and produce huge amounts of pressure. Black powder is the classic deflagrating explosive. It doesn't explode but combusts rapidly, producing relatively low pressure.

Bomb experts further classify high explosives according to the ease with which they react chemically.

As you can imagine, how a bomb maker assembles these explosives can vary wildly. A skilled worker who builds a bomb in a controlled environment according to tight specifications, usually for military applications, produces ordnance, or munitions. People who build one-off bombs in their basement, sometimes simply and sloppily, produce improvised exploding devices, also known as IEDs. IEDs are particularly dangerous, not because they contain high explosives, but because they take so many different forms. They also usually contain ball bearings, screws or nails to inflict maximum damage as they ride the blast's shock wave. IEDs can be packed into cars, briefcases, backpacks, pressure cookers and pipes, all of which can be easily transported and inconspicuously placed.

Bomb disposal teams must deal with any and all of these threats at a moment's notice. One day, they might receive a call about a suspicious vehicle parked next to a government building. The next they may be heading to the airport to investigate a suspicious bag. Even old fireworks and ammunition can be a serious threat if they aren't disposed of properly. Luckily, bomb technicians can do some of their work at a safe distance.