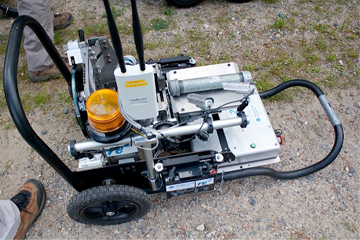 There are two versions of what happens when a bomb disposal team arrives at the scene of a suspected explosive device. In the Hollywood version, bomb technicians don their suits and start making their way toward the device -- what insiders call "the long walk." In reality, bomb disposal specialists are way too smart to put themselves in harm's way so readily. Hands-on intervention is a last resort.

Almost all modern bomb squads rely on robots to get their first good look at a threat. Think Wall-E, with tank tracks for propulsion and pincer-like appendages for gripping. Some are small enough to squeeze into a backpack. Others must ride in another vehicle, such as a purpose-built bomb truck. All are capable of navigating different types of terrain and climbing stairs. Some robots, such as the Semi Autonomous Pipe Bomb End-cap Remover (SAPBER), focus specifically on dismantling bombs. Most, however, can investigate threats and, if necessary, neutralize them.

The iRobot 510 PackBot serves as a good example of a modern EOD robot. It's small, lightweight and can move at a top speed of about 6 miles (9.7 kilometers) an hour. It draws power from two lithium-ion rechargeable batteries, which provide more than four hours of continuous operation on a single charge. Its advanced manipulator offers four independent degrees of freedom: shoulder, elbow and wrist joints that can pivot, and a gripper that can open and close. The manipulator can lift up to 30 pounds (13.6 kilograms) and turn a full 360 degrees on a rotating turret. The PackBot also comes with a pan-tilt-zoom camera and two arm cameras, which means the machine can provide comprehensive views of any device [source: iRobot].

Bomb technicians control these robots with a separate unit -- essentially a laptop -- equipped with a hand controller. They can take a complete visual tour of a bomb's exterior, but more importantly, they can use robots to peek at the device's innards. Many robots come with X-ray scanners that can see through an outer shell and transmit images back to a display on the control unit. These images can be enlarged and digitally manipulated for further analysis, either by on-site technicians or bomb experts at other locations. If X-ray scans prove insufficient or difficult to obtain, the robot's manipulator can remotely open a device, literally peeling away its skin to reveal the components and hardware inside. They can tell if the bomb has a detonator, a fuse or any other defining characteristic that reveals how it was made and how it can be defeated.

Armed with all of this diagnostic information, bomb technicians are finally ready for the most complex and dangerous part of any disposal operation -- neutralizing the threat. As we'll see next, robots, not humans, do most of this dirty work.