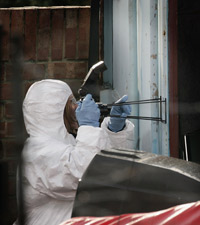 A forensic photographer takes a close-up image of a container's door in Bexley, England. Police had just discovered millions of pounds stolen in a bank heist.
Peter Macdiarmid/Getty Images

­Crime scene photographers must be methodical in their work.­ They can't afford to leave out an important piece of evidence or produce photographs that could be considered misleading in court. But they also have the press­ure of the entire operation behind them. Before other CSIs can touch or move any of the evidence and even before the medical examiner can remove the body, the forensic photographer must document the scene.

There are three classifications of forensic photos -- overviews, mid-range and close-ups.

If the crime took place inside, overviews include photos of the outside of the building, its entrances and exits as well as images that place the building in relation to its surroundings. Photos of spectators at the scene can later help locate witnesses or suspects. Overviews also include images of all rooms, taken from overhead and from each corner.

The forensic photographer then hones in on key pieces of evidence and captures images of them in the context. These mid-range photos might picture a piece of evidence, like a knife, but at enough of a distance to show its relation to furniture, a blood stain or the rest of the room. Mid-range images establish the distance of object from surrounding objects.

Finally, the photographer thoroughly documents evidence with close-up images. Close-ups include identifying marks like scars on a corpse or serial numbers on a bloodied piece of electronic equipment. A photographer will often include a ruler in the shot to establish scale but always takes a duplicate image without the measuring device. In court, the defense could claim the device covered something important.

And of course, pictures are of no value unless they're in context. A forensic photographer keeps a photo log that includes every relevant detail, the photo number, any filters applied, the time and date and the location and a description of the object. The advent of digital photography has helped to make some aspects of recording the time and date simpler and more verifiable.

­What does a forensic photographer need to document the scene? And what makes a photograph admissible in court? Find out next.

Alphonse Bertillon didn't just establish the ground rules for crime scene photography -- he also invented the mug shot. Bertillon was influenced by eugenics, a then-common form of scientific racism. He believed that a person's character could be read through his or her genetic features and he used the standardized mug shot as an attempt to validate this theory.