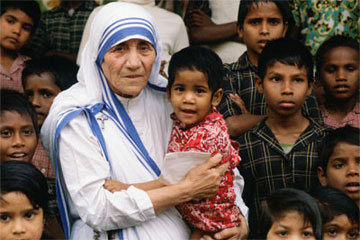 Mother Teresa snagged her peace prize in 1979 for tirelessly working to help children and refugees. You know who never got one? Mahatma Gandhi aka the "missing laureate."
Deshakalyan Chowdhury/AFP/Getty Images

Few scientists experience the unique honor of receiving an unexpected phone call with a foreign voice on the other line. At first, such an event may seem like more of an annoyance than anything else. But once the message becomes clear -- that they've won the Nobel Prize -- life won't be the same.

When 1996 Nobel laureate Peter Doherty got a phone call at 4 a.m. in his Tennessee home, his first reaction was that something had happened to his parents in Australia. Instead, he was told he had won the Nobel Prize in physiology or medicine. The committee gave him a 10-minute head start on the media. After that, the phone rang constantly -- Doherty and his family were shocked [source: Doherty].

The Nobel Prizes -- a set of awards honoring the best work in physics, literature, chemistry, medicine, peace and economics -- are viewed as the highest intellectual honor in the world. Alfred Nobel, peace advocate and inventor of dynamite, left the money for the first five awards in his will. In 1901, the Nobel prizes were born.

But what does it take to win a Nobel Prize?

Though there's no clear formula for success, there are certain traits common to many Nobel laureates. Above all, the prize favors people who seek to advance human knowledge or create solutions to the world's problems, with accomplishments ranging from Robert Koch's discovery of the bacterium responsible for tuberculosis to Martin Luther King Jr.'s leadership of the U.S. civil rights movement in the 1960s.

People who create paradigm shifts, or major shifts in thinking for a field, are more likely to receive a Nobel Prize for their work. For instance, it would be tough to imagine where theoretical physics would be without Albert Einstein's contributions that earned him the Nobel Prize in physics in 1921.

One way to boost your chances of scoring a Nobel is by placing yourself close to the research at hand. Ralph Steinman, a recent winner who passed away from pancreatic cancer, was so engrossed in his cancer vaccine research that he developed and tested an experimental treatment on himself in the years building up to the award [source: Altman and Wade].

In the prize's science categories, the people actually conducting the research typically win the Nobel. The Nobel Peace Prize, however, has a history of being awarded to people who are more leaderlike in their preservation of peace (think Obama in 2009) [source: NobelPrize.org].

How the person communicates with the public matters, too. Winners typically are well-versed in their field, with some even taking the extra step to explain their work to nonspecialists and general audiences. People who win the prizes don't usually strive for the honor. Instead, they're immersed in their fields and passionate about making a difference in the world.

Think you have what it takes to earn a Nobel? Find out -- next.

Nobel Laureates: Not Your Average Joes

To get yourself in a position for that Nobel Prize, it's good to know the type of folks who have won the awards in the past. It's worth mentioning that you can't nominate yourself for a Nobel Prize. Instead, the selection committees, from institutions specifically chosen in Alfred Nobel's will, collect nominations from prestigious contributors in the field who are well-connected and able to recommend others. There's no limit on the number of times a person can be nominated. For example, women's suffrage and peace advocate Jane Addams' name came up 91 times before she won the Nobel Peace Prize in 1931 [source: NobelPrize.org].

Depending on the type of award, a selection committee will choose winners from the nominations sent in. Committees in Sweden handle selections of all awards except the peace prize, which Alfred Nobel had requested a Norwegian committee be in charge of. For most awards, such as those given for physics, the deadline is February of each year, and winners are chosen in October [source: NobelPrize.org]. Nobel prizes aren't awarded to deceased individuals, unless the recipient dies between the time he or she is notified and the award ceremony a few months later [source: Altman and Wade].

But there's some debate about how the Nobel Prize committee selects winners. Beginning in the 1960s, some have argued that the process to select winners is subjective based on the preferences of a select few people on the committees [source: Garfield and Malin]. Another argument is that the awards favor individual careers over individual accomplishments. Many Nobel laureates receive the awards years after their most famous work, mostly because it could take years to see how a line of work ended up having a large impact. This isn't always the case, though. For example, former Soviet leader Mikhail Gorbachev received a Nobel Peace Prize shortly following his decisions that would lead to the end of the Cold War [source: NobelPrize.org].

On the academic front, researchers in a position to win the Nobel Prize usually publish more in peer-reviewed journals and are more likely to collaborate with others in the field. Still, there should be evidence that the person's work has had an impact on the scientific community -- for example, the number of citations a journal article has is somewhat indicative of its impact. One estimate suggests the top 0.1 percent of people most cited in their fields typically have a better shot at the Nobel [source: Pendlebury]. The committee also tends to view papers and experiments that stimulate additional research as beneficial.

Learn more about the prestigious Nobel awards next as you mull over your prizewinning strategy.

Adolph Hitler received a nomination for the Nobel Peace Prize in 1939 from one E.G.C. Brandt, then a member of the Swedish parliament. The stalwart antifascist didn't intend for the committee to take his nomination seriously. And it didn't. The satiric nomination was withdrawn swiftly -- you might even say Jonathan Swift(ly).

5 Facts About Marie Curie and the Winningest Nobel Prize Family in History
Why Is 137 the Most Magical Number?
Stephen Hawking Right Again?