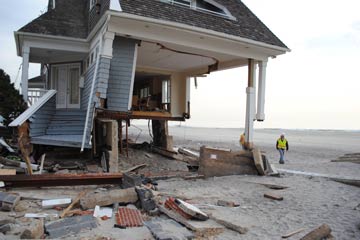 On Oct, 29, 2012, the largest Atlantic hurricane on record made landfall north of Atlantic City, N.J. By that night, Hurricane Sandy had grown to a Category 1 storm with winds exceeding 80 mph (129 kph). One of the greatest dangers associated with hurricanes is the storm surge, the wall of rising seawater that the massive storm system pushes ashore, often causing disastrous flooding. In the case of Sandy, the storm surge was amplified by tide levels already 20 percent higher because of a full moon [source: Sharp].

When the roaring wind and pounding rain finally calmed, Sandy had taken 149 lives along the Eastern seaboard of the U.S., Canada and the Caribbean. Large portions of coastal New Jersey and New York were underwater, and the scope of the damage was staggering, estimated in the hundreds of billions of dollars. How would these towns and neighborhoods ever recover? How would they dig themselves out of the wet, moldy debris and rebuild? And who would be there to help them?

By April 2013, the Corps had removed nearly 1 million cubic yards (765,555 cubic meters) of debris from New York City alone. The Corps brought in hundreds of dump trucks and backhoes to move mountains of debris from Staten Island onto barges, which traveled up the Hudson River to a landfill. In the process, the Corps reserved 175,000 cubic yards (133,797 cubic meters) of recyclable and reusable materials, including reclaimed wood from damaged boardwalks [source: Lipton]. In addition, Corps surveyors and geologists conducted a comprehensive survey of the Atlantic coastline to recommend measures to reduce damage from future storms and rising sea levels due to climate change [source: Ward].

Disaster response is only one of the many important roles that the Corps plays in the United States and in more than 90 countries worldwide [source: USACE]. This federal agency has had a remarkable history, going back to the founding of America. 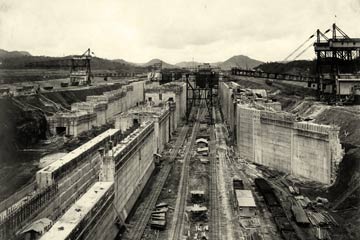 Missions of the U.S. Army Corps of Engineers 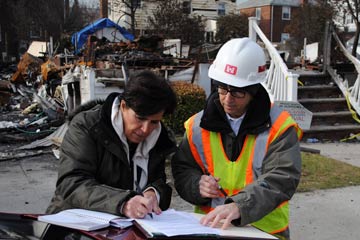 The Army Corps of Engineers continues to serve in critical capacities in both military and civilian life. To support the military, the Corps is the chief engineer and builder of military barracks and fortifications abroad. The Corps also plays a central role in post-war reconstruction efforts in places like Kuwait, Iraq and Afghanistan. It is also responsible for remediation efforts to remove toxic waste from former military sites in the U.S. and abroad.

Since the 1950s, the Corps has served a diplomatic and foreign aid mission as the engineering lead on infrastructure projects worldwide. The Corps has built roads, highways, railroads, airports, ports and water systems in countries from the Middle East to Africa and East Asia.

The Corps remains the chief conservation agency for America's rivers, coastlines, lakes and wetlands. It operates more than 600 dams — including large hydroelectric power generators — maintains 12,000 miles (19,312 kilometers) of inland rivers and canals, manages 926 coastal and inland harbors, and preserves tens of thousands of acres of wetlands through its regulatory oversight [source: USACE].

Disaster planning and relief continues to be a major mission. In addition to clearing away debris after a storm, the Corps is charged by FEMA with delivering truckloads of bottled water and bagged ice to disaster victims. It also builds temporary housing for displaced victims and contributes to reconstruction efforts. In the wake of the levee failures in New Orleans during Hurricane Katrina, the Corps conducted a $13 billion overhaul of the levee system [source: Cart].

Any construction project that alters the shoreline of a river, is located near or within a wetland, or requires the dredging of a body of water, must receive a permit from the Army Corps of Engineers [source: USACE].

The agency also conducts scientific research and technological development, mostly pertaining to water conservation, geology and ecology. It opened the Waterways Experiment Station (WES) in Vicksburg, Miss. following the Great Flood of 1927. The WES campus, which is now the headquarters of the Engineer Research and Development Center, is home to five separate R&D labs operated by the Corps studying everything from hydraulics to information technology, with additional research centers in Virginia, Illinois and New Hampshire [source: USACE].

The Army Corps of Engineers helped build the backbone of the U.S. water infrastructure, and has saved countless lives through its disaster planning efforts, but the agency is not without its critics. 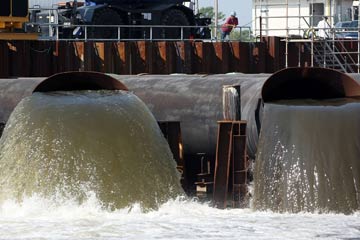 What's Really Going on at the 'Tesla Tower'?
You Can Bejewel Your Prosthetic
8 of the 10 Most Dangerous U.S. Cities for Pedestrians Are in One State