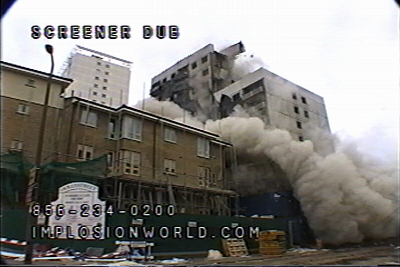 In the last couple of sections, we looked at everything blasters do to prepare a building for implosion. In addition to these measures, the blasters must prepare the people in the area for the blast, assuring local authorities and neighboring businesses that the demolition won't seriously damage nearby structures. The best way blasters can calm down anxious authorities is by demonstrating the firm's success with previous implosions.

Two towers in the Holly Street Development in London, England, were demolished in March 2001. They were a formidable challenge for the blasting firm, Controlled Demolition Group, Ltd.. One tower had to be rigged so it would fall over on its side, away from a gas line, while the other had to collapse perfectly into its own footprint, to avoid damaging neighboring structures. The demolition went exactly as planned, with no damage whatsoever to the gas lines or the neighboring buildings.

To help the blasters work through this process, a blasting company may bring in an independent demolition consulting firm, such as Protec Documentation Services. Protec uses portable field seismographs to measure ground vibrations and air-blasts during an implosion. Brent Blanchard, an operations manager for the company, says that they also inspect surrounding structures prior to the implosion, so that they can help assess any damage claims following the blast. Additionally, Protec's staff videotapes the blast from multiple angles so that there is a record of what actually happened. Using data collected from previous blasts, the company's engineers can predict ahead of time what level of vibration a particular implosion may cause.

Once the structure has been pre-weakened and all the explosives have been loaded, it's time to make the final preparations. Blasters perform a last check of the explosives, and make sure the building and the area surrounding it are completely clear. Surprisingly, implosion enthusiasts sometimes try to sneak past barriers for a closer view of the blast, despite the obvious risks. With the level of destruction involved, it is imperative that all spectators be a good distance away. Blasters calculate this safety perimeter based on the size of the building and the amount of explosives used.

On occasion, blasters have misjudged the range of flying debris, and onlookers have been seriously injured. Blasters might also overestimate the amount of explosive power needed to break up the structure, and so produce a more powerful blast than is necessary. If they underestimate what explosive power is needed, or some of the explosives fail to ignite, the structure may not be completely demolished. In this case, the demolition crew brings in excavators and wrecking balls to finish the job. All of these mishaps are extremely rare in the demolition industry. Safety is a blaster's number-one concern, and, for the most part, they can predict very well what will happen in an implosion.

Once the area is clear, the blasters retreat to the detonator controls and begin the countdown. The blasters may sound a siren at the 10-minute, five-minute and one-minute mark, to let everyone know when the building will be coming down. If they are using an electrical detonator, the blasters have a detonator controller with two buttons, one labeled "charge" and one labeled "fire." Toward the end of the countdown, a blaster presses and holds the "charge" button until an indicator light comes on. This builds up the intense electrical charge needed to activate the detonators (this is similar to charging a camera flash to build the necessary electrical energy to illuminate a scene). After the detonator-control machine is charged, and the countdown is completed, the blaster presses the "fire" button (while still holding down the charge button), releasing the charge into the wires so it can set off the blasting caps.

Typically, the actual implosion only takes a few seconds. To many onlookers, the speed of destruction is the most incredible aspect of an implosion. How can a building that took months and months to build, and stood up to the elements for a hundred years or more, collapse into a pile of rubble as if it were a sand castle?

Following the blast, a cloud of dust billows out around the wreckage, enveloping nearby spectators. This cloud can be a nuisance to anyone living near the blast site, but blasters point out that it is actually less intrusive than the dust kicked up by non-explosive demolition. When workers take down buildings using sledgehammers and wrecking balls, the demolition process may take weeks or months. In this time, a significant amount of dust is being kicked up into the air every day. When the building is leveled in one moment, on the other hand, all the dust is concentrated in one cloud, which lingers for a relatively short period of time. Nearby residents with allergies can leave the area for that one day and avoid the dust entirely.

The Scudder Homes in Newark, N.J., blasted by Engineered Demolition, Inc. in the summer of 1996
Photo courtesy ImplosionWorld.com

After the cloud has cleared, the blasters survey the scene and review the tapes to see if everything went according to plan. At this stage, it is crucial to confirm that all of the explosives were detonated and to remove any explosives that did not go off. If a demolition consulting crew was on hand, the blasters review their vibration and air blast data as well. Most of the time, experienced blasters bring buildings down exactly as planned. Damage to nearby structures, even ones immediately adjacent to the blast site, is usually limited to a few broken windows. And if something doesn't work out quite right, the blasters log it in their mental catalog and make sure it doesn't happen on the next job. In this way, job by job, the science and art of implosion continues to evolve.

For more information on building implosion, check out the links below.