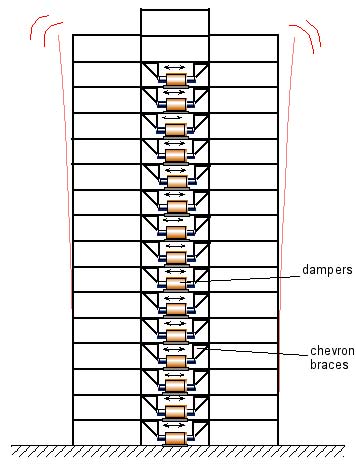 In the future, buildings might be built with hundreds of large dampers filled with MR fluid to stabilize the structures during earthquakes. This diagram shows how the dampers would work during an earthquake.
Photo courtesy Lord Corp.

Unlike many of nature's deadly forces, earthquakes almost always strike without warning. These destructive and devastating forces can topple cities in seconds, leaving behind rubble a­nd tragedy in their wakes. Earthquakes are not limited to any one area of the world or any one season of the year. Although most earthquakes are just small tremors, it only takes one to cause millions of dollars in property damage and thousands of deaths. For this reason, scientists continue to pursue new technologies to limit the destruction that earthquakes can dish out.

At Lord Corporation's labs in Cary, N.C., researchers believe they have developed, in cooperation with University of Notre Dame researchers, the latest product that can reduce the damage caused by earthquakes. Lord is one of the largest producers of a unique substance, called magnetorheological fluid (MR fluid), which is being used inside large dampers to stabilized buildings during earthquakes. MR fluid is a liquid that changes to a near-solid when exposed to a magnetic force, then back to liquid once the magnetic force is removed.

During an earthquake, MR fluid inside the dampers will change from solid to liquid and back as tre­mors activate a magnetic force inside the damper. Using these dampers in buildings and on bridges will create smart structures that automatically react to seismic activity. This will limit the amount of damage caused by earthquakes. In this edition of How Stuff WILL Work, you will learn more about MR fluid and its ability to change states. We will also look at how buildings, new and old, can be turned into smart structures.