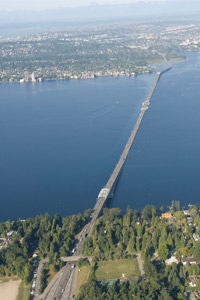 This is the Albert D. Rosellini Bridge - Evergreen Point in Washington State. It’s the longest floating bridge in the world and is slated for replacement by an even bigger and hardier bridge. See more bridge pictures.
Image courtesy of Lake Washington Construction Management

Maybe someday we'll all have cars that can convert, Transformer-style, from highway mode, to helicopter, to boat. But until that Jetsons-type of awesomeness takes off, we're mostly stuck traversing just asphalt and concrete. Sometimes, though, the highways themselves manage some pretty cool technological tricks, as in the case of floating bridges.

Floating bridges (also called pontoon bridges) are not equipped with sailing masts or outboard motors of any kind. So although you can't go joyriding through the ocean waves with them, you actually can go joyriding on them in your car.

But frivolous fun takes a backseat to the more utilitarian purposes that floating bridges serve. Without these wet and wonderful highways, a number of the world's metropolitan areas would likely have to make do without any sort of bridge at all, which would greatly affect their traffic flow, and population and economies as a whole.

In terms of numbers, though, permanent floating bridges are still a very unusual type of structure. Only around 20 of them exist in the world, and four of them are found in Washington state [source: Washington DOT], which due to its high population, powerhouse economy, and watery metro areas requires more floating bridges than anywhere else.

The design of floating bridges varies greatly by location and purpose. Some are humungous structures of concrete and steel that can support the almost unimaginable weight inflicted by ceaseless commuter and commercial traffic.

Others are simple wood-based arrangements best for much lighter loads. Take, for instance, the famous bridge in Brookfield, Vt. This 330-foot (98-meter) wooden bridge now supports only foot traffic. But the bridge was famous in part because the wheels of vehicles often got a wet as they crossed.

Temporary kinds of pontoon bridges are much more common than permanent ones. These bridges might be used in emergencies and often come in handy when soldiers need to move people and equipment over rivers or lakes. These short-lived bridges might be made from wood or metal, and even inflatable tubes.

Whatever their materials might be, floating bridges all have one in thing in common – they really do float. Cross on over to the next page, and you'll see that these special structures have a long, fascinating history that, well, bridges all sorts of engineering territory. 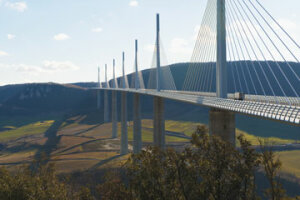 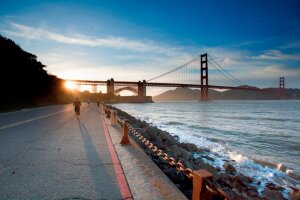