These Bridges Don't Burn (But They Do Sink) 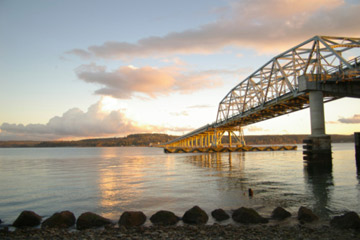 The Hood Canal Bridge has experienced some problems over the years.
iStockphoto/Thinkstock

Natural disasters can ruin a lot of human creations, and floating bridges are no exception. Wind, waves and corrosion are all major enemies of these mostly concrete and steel bridges. And no matter how much planning goes into bridge construction or how much engineers "overdesign" bridges to account for unexpectedly extreme circumstances, floating bridges can and do fail.

As engineers plan floating bridges, they take local conditions into account, by trying to anticipate characteristics of wind and wave movement. They must also consider the possibility of unusual events, such as ship strikes or wildly powerful storms. Usually, designers design bridges to withstand a storm so strong that it occurs only once every 100 years, and the bridges themselves are purposely built to allow for some flexing as temperature, wind and waves change.

In the event of a strong storm with high winds and waves, traffic is often suspended, and if the bridge has a navigational opening, such as a draw bridge, it's opened to relieve stress. That's what owners of the Hood Canal bridge did in 1979 during a windstorm in February 1979, to no avail.

During the storm, the doors to the tops of the bridge's western pontoons either blew open or were left open on accident. Water from rain and waves 10 to 15 feet high began to slowly fill the pontoons, while waves slammed against the bridge for hours until it began to break apart and was finally destroyed.

And in November 1990, renovation crews were working on the Lake Washington bridge, and as the crews departed for Thanksgiving weekend, a major storm approached. With the permission of engineers, work crews had been storing wastewater from their project in some of the bridge's huge concrete pontoons. To do so, they'd temporarily removed the pontoons' watertight doors. As the storm moved through, seawater and rain filled the pontoons, and slowly, as live TV captured the disaster, the bridge ripped apart and sank.

Both bridges were eventually replaced using updated engineering knowledge and construction techniques. Yet fears remain that massive floating bridges are not durable enough to justify their great initial expense. Floating bridges are also notorious for being extremely expensive to maintain. They are subjected to so many natural forces that they must be constantly monitored for cracks and other deficiencies, which require time and equipment to repair.

These types of problems don't stop engineers from proposing and erecting floating bridges. Keep reading, and you'll find out more about famous bridges across the globe.