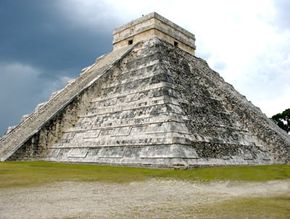 The ancient pyramids are among the most astonishing structures in the world. Built in ancient times by workers who didn't have the benefit of modern tools and machinery, they are a constant source of fascination. Most of us think of ancient Egypt when pyramids come to mind, but they exist in many parts of the world. Why did the ancients build pyramids? What was their purpose? Is there any special meaning behind the pyramid shape? How were they built without earth-moving or heavy-lift machinery? In this article, we'll examine pyramids around the world, how they were constructed and who used them.

What is a pyramid?

A pyramid is a geometrical solid with a square base and four equilateral triangular sides, the most structurally stable shape for projects involving large amounts of stone or masonry. Pyramids of various types, sizes and complexities were built in many parts of the ancient world (like Central America, Greece, China and Egypt). In the history of Egypt and China, they were primarily tombs and monuments to kings and leaders. The pyramids of the Mayans and Aztecs of Central America were mainly religious temples, though some of them housed burial chambers.

The ancestors of these great structures are the burial tombs found throughout North America and Europe -- simple mounds of earth that covered burial chambers. The first tombs of the Egyptian pharaohs were flat, box-shaped buildings called mastabas (Arabic for "bench"). Pharaohs later built grander tombs by adding levels on top of the box to form stepped pyramids. Stepped pyramids are prevalent in Central America. In Mesopotamia, they were called ziggurats.

The Egyptians took pyramid design to new heights, culminating in the constru­ction of the pyramids of Giza in the 26th century B.C. Laborers used 2.3 million blocks of limestone and granite to build the Great Pyramid of Khufu, which stands 146 meters high, has a 230-meter-square base and weighs about 6.5 million tons. A number of pyramids, including the Great Pyramid of Khufu, have survived thousands of years of exposure to the elements, a tribute to the ancient architects, engineers and workers who built them.

In the next section, we'll learn more about the pyramids of Egypt and the evolution of pyramid design.

Laborers used 2.3 million blocks of limestone and granite to build the Great Pyramid of Khufu, which stands 146 meters high, has a 230-meter-square base and weighs about 6.5 million tons. 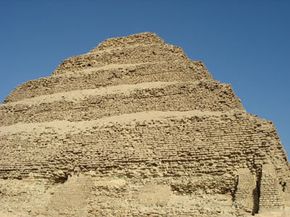 The first stepped pyramid in Egypt, in Saqqara, was completed in 2620 B.C. for the Third Dynasty Egyptian pharaoh Djoser. It had six levels and an underground burial chamber. Builders later attempted, but never finished, another six-level stepped pyramid.

The Egyptians continued to construct taller and taller pyramids and started smoothing out the jagged edges of stepped pyramids. One of the earliest attempts was the Meidum pyramid, in 2570 B.C. It had seven steps progressing to eight, but it collapsed and was abandoned.

Pyramid designers learned that if pyramids were going to be higher and have steeper slopes, their bases needed to be wider. At Dahshur, further upstream along the Nile from Saqqara, laborers started the construction of a pyramid for the Fourth Dynasty pharaoh Sneferu. Unfortunately, the designers chose a poor foundation, and the pyramid began to lean inward upon itself when it was about two-thirds complete. The builders reduced the angle of the upper portion to complete it and make it more stable, and it is now known as the Bent Pyramid (2565 B.C.).

Unsatisfied with the Bent Pyramid, Sneferu ordered another pyramid at Dahshur. The designers chose a better foundation and made this pyramid the same height as the Bent Pyramid, but with a wider base and a shallower angle. The Red Pyramid was completed in 2560 B.C.

Pyramid construction reached its apex with the Great Pyramid of Khufu. We'll learn all about it on the next page.

The Great Pyramid of Khufu 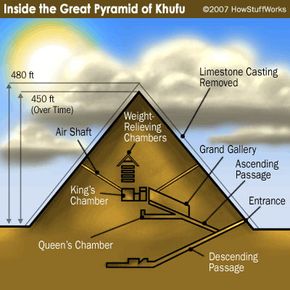 The Giza pyramid complex, on the west bank of the Nile, is the most famous group of pyramids in the world. As we discussed earlier, the grandest pyramid was built for Sneferu's son, Khufu, in 2540 B.C. The two smaller pyramids nearby were for Khufu's son, Khafre, and his grandson, Menkaure. After this dynasty, great pyramid building stopped, probably because of the time and expense of these massive state projects.

The Great Pyramid of Khufu on the Giza plateau in Egypt is the largest and most elaborately constructed pyramid in existence, representing the most advanced aspects of pyramid construction. Khufu's pyramid has the following features:

On the next page, we'll learn about the construction of the pyramids at Giza. 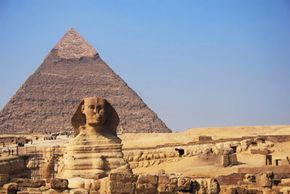 on the Giza plateau in Egypt.
© Photographer: Foxie_aka_ashes | Agency: Dreamstime

Pyramid construction is a continuously debated topic. There are no existing records of building plans or discussions of construction methods, so no one knows exactly what happened. Of course, archaeologists and engineers have plenty of ideas -- some sound far-fetched and others seem more reasonable. We'll use the Giza pyramids as an example because we have the most information on them.

Let's break the task of building the pyramids into components:

Surveying and ExcavationEgyptian builders probably made plans and models of the pyramid. The projects were overseen by the pharaoh's master builder, or vizier.

The collapse of the Meidum pyramid and the shift of the Bent Pyramid taught builders that foundations were important. Once engineers found a suitable site with a good foundation, they had to lay out the site. Pyramid sides always ran parallel to the north-south and east-west axes. The builders didn't have compasses, and there was no North Star at the time (the Earth's rotation wobbles like a top, and the position of true north in the sky changes over a 40,000-year cycle). So, they used the movements of circumpolar stars or the sun to figure out true north. Using sighting rods and circles, they could trace arcs of the rising and setting stars or the sun's shadow, measure the angles to the ends of the arc, and calculate true north. Once they established that, they could find the other directions with lines and right angles.

The ancient Egyptians used "cubits" (the length from the tip of your middle finger to your elbow) and "hands" (the width of your hand with the thumb on the side) for measurements. They dug post holes at regular intervals (10 cubits) along the base outline and laid out the site in a grid.

Then, laborers excavated and leveled the foundation. No one is sure of the exact method, but they were extremely exact -- the base of Khufu's pyramid is level to 2 centimeters (less than an inch).

There are two main theories about leveling methods:

1) Workers poured water into the excavated site and leveled all material above the waterline. Then they lowered the water level and removed more material, continuing the process until the foundation was level.

2) The builders installed posts at regular intervals. A line, leveled with plumb bobs, was pulled taut across the posts at a reference mark to ensure alignment. Then they could excavate the foundation down to the reference marks.

Once the foundation preparation was finished, the grunt work could begin. We'll learn on the next page how the laborers transported the pyramid stones and put it into place. 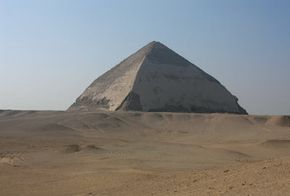 The pyramids were built of limestone, granite, basalt, gypsum (mortar), and baked mud bricks. Limestone blocks were quarried at Giza and possibly other sites. Granite likely came from upriver at Aswan. Alabaster came from Luxor and basalt from the Fayoum depression.

Iron tools were not available, so workers used copper and stone-cutting tools to carve out the blocks in the quarries. They then used levers to move the stone blocks away from the quarry site.

Again, no one knows how laborers were able to get the 2.5-ton stone blocks from the quarries to the building site. Wheels wouldn't have been useful on the desert sand and gravel, so they most likely dragged the blocks with wooden sleds and ropes. Some think that workers used quarter-circle wooden sleds that fit around a rectangular block. They attached the sleds to the block, and a crew of about eight men rolled them along the ground, much like rolling a keg of beer. Others say the laborers used wooden rollers.

For long-distance transport, the blocks were loaded on barges and transported down the Nile. Workers dug canals to get the barges nearer to the site.

Egyptologists estimate that workers placed­ about 300 stones a day during pyramid construction. Several theories -- lever systems, ramps and kites, for example -- attempt to explain how the huge blocks got into place. Those in the know generally accept the ­ramp idea, but they debate the exact ramp configurations. The ramps could have been long and straight, perpendicular to the sides or wrapped around the core.

While laborers placed stones in the core, stone cutters were making the chambers, passageways and shafts in the pyramid's interior. Artists inscribed the designs that adorned the chamber walls. Let's take a closer look at the workers who built the pyramids.

There are a few striking examples of modern pyramids. The glass and steel pyramids in the courtyard of the Louvre in Paris (above), were designed by architect I.M. Pei in 1989. The 48-story Transamerica Pyramid in San Francisco was finished in 1972. The Luxor Hotel and Casino in Las Vegas, was built in the shape of a pyramid with a replica of the Sphinx in front of it. It is now undergoing a makeover to eliminate the ancient Egyptian theme.

The Greek historian Herodotus described the building of Khufu's pyramid by more than 100,000 slaves. Hollywood seized upon this image of slaves and their taskmasters in movies like "The Ten Commandments." But when Harvard archaeologist Mark Lehner led an expedition to uncover clues about the people who built the pyramids, he found no evidence of housing for such a large population. Instead, his group discovered housing and food storage places for small gangs of workers. It appears that at any one time about 2,000 workers were on site, divided into two large divisions and smaller groups of about 200 men. The evidence indicates that they were probably paid and well fed. The working groups were periodically rotated over the years of pyramid construction, and the total workforce may have been about 30,000 [source: Harvard Magazine].

Pyramid building stopped in Egypt long ago. When the Spanish conquered the Aztecs and Mayans, the Central American pyramids were abandoned in the jungles until archaeologists uncovered and studied them. Archaeological research continues on these structures today to resolve the many mysteries of how they were built. 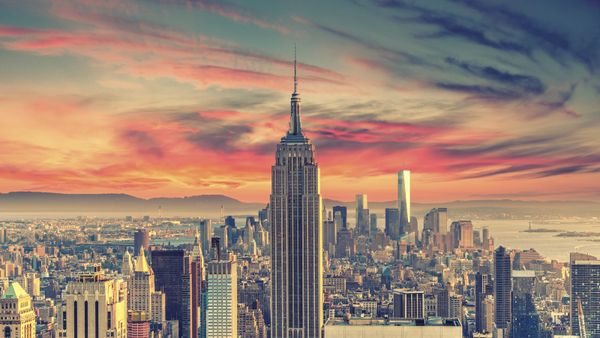