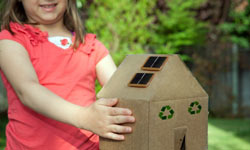 We're surrounded by vampires. Only they live on energy, not blood. That big-screen TV, your computer, Xbox, furnace, refrigerator, stove, microwave -- they all suck energy. Some, like your cable box or DVD player, are truly ghoulish: They drink energy even when not in use.

These power-hungry monsters can do some serious damage. About 70 percent of our energy comes from non-renewable sources like oil and natural gas. When they're gone, they're gone for good. Also, some energy sources, such as the coal-burning power plants that generate nearly half of U.S. electricity, pour out carbon dioxide, which threatens to change Earth's climate in dangerous ways [source: Dosomething.org].

Energy vampires drain pocketbooks as well. In 2011, each American spent an average of $4,410 a year on energy [source: Clayton]. Putting a stake through the heart of energy waste can put dollars in your pocket.

There are three simple ways to conserve energy:

To slay the energy vampires, you first have to understand how each of these energy conservation methods works. The experiments that follow can help to make people of all ages more energy savvy -- some may even improve your bottom line.

You need energy to heat water. Therefore, if you can get clean without using so much hot water, you'll save. But which uses more hot water, a bath or a shower? This experiment will help you determine that.

Ask everybody in your household to take a bath instead of a shower when they need to wash. Make sure each person leaves the water in the tub when he or she is finished. Then check the height of the water. You can mark it with a bath crayon or with colored tape. Or you can measure it with a ruler and record the level.

Next, have everybody take a shower. (This works best if you have a shower/tub combo.) Ask them to plug the drain before they start so the water doesn't run out. Measure the amount of water left in the tub when each person is finished and mark or record it.

Now compare the average amount of water used for each method. The one that required less water is the one that will save more energy -- and the one you should recommend for use in your household.

Think of ways you could save even more energy. What if you turned off the shower when you're soaping? Using a low-flow shower head, which can put out as much as 72 percent less water, can make a difference, too [sources: Energy Information Administration: Saving, titanheater.com].

4: Which is the best insulator? 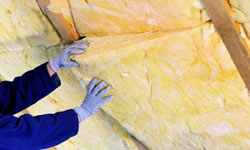 This experiment proves how certain types of insulation material may work better than others.
©iStockphoto.com/LianeM

Insulating your house holds heat in, so you run your furnace less often when it's cold outside. However, insulation can also keep things cold -- your refrigerator, for example, is insulated to keep the heat out. Either way, insulation saves energy by keeping your appliances from having to work as hard to maintain the temperature. This experiment helps you find out which materials make the best insulators.

Start with two cardboard shoe boxes. Tape black paper to the outside of the bottom of each. Place the top of each box upside down in a sunny location. Lay a thermometer on each top.

Now, fit the bottom of one box over the top so that the black paper faces up toward the sun. This uninsulated box is your control. It shows what happens without insulation.

Next, take the material you want to test, shape it to completely fill the bottom of the second box and tape it to make sure it stays in place. You can choose almost any material to test, including Styrofoam, a towel, layers of newspaper, a piece of bubble wrap or some artificial fleece. Fit the box over the other top. Make sure the two boxes receive the same amount of sunlight.

After 15 minutes, open the boxes and record the temperature in each. The inside of the insulated box should be cooler than the control box. The greater the temperature difference, the better the material works as an insulator. Repeat the experiment with different materials. Finally, think about why some materials insulate better. For example, maybe they trap dead air spaces that don't allow heat to circulate [source: Energy Information Administration: Insulation].

3: The Energy Effects of Shade and House Paint

Can something as simple as shade from a tree or paint help save on home energy bills? This experiment will help answer that question. The "house" in this case will be a small cardboard box. A 100-watt bulb in a reflector lamp will play the role of the sun.

First, set up the box. Make sure it has a lid that shuts tightly. Put a thermometer inside to measure the temperature. Then, arrange the light so that it shines directly on the box. After 20 minutes, record the temperature inside the box.

Next, set a house plant between the lamp and the box so that its shadow rests on the "house." You can also use branches broken from trees or bushes for this, instead of a house plant -- just stand them in pots of sand to provide stable shade. Check the temperature again after 20 minutes. Did the shade keep the box cooler? Try different plants with different types of leaves. Which makes the most difference in temperature?

To test paint's energy effect, take two identical boxes and paint one white and one black or a dark color. Put each an equal distance from the light and record the temperature inside after 20 minutes. Which box gets hotter? How would this affect energy usage if it were an actual house?

Basically, choosing the right shade trees or exterior paint color could help save energy if they keep a house cooler in summer and cut the need for air conditioning. In winter, however, it might be better not to have shade, so that the house could absorb heat from the sun. In that case, trees that lose their leaves in winter might be the best energy savers [source: Energy Information Administration: Sun]. 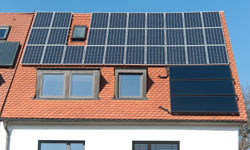 The box you make for this experiment will be like the solar collectors people have on their rooftops.
©iStockphoto.com/wakila

You can make your own hot water using only the power of the sun. You'll start with a flat box that's about 3 feet (90 centimeters) square and 2 or 3 inches (5 or 7.5 centimeters) deep. Paint the inside black or line it with black paper.

Next, take 20 feet (6 meters) or more of flexible black tubing. Make two holes in the sides of the box, one near a corner and the other near the opposite corner. Insert the end of the tube through one hole. Shape the tubing into flat loops that don't overlap but run up and down the bottom of the box. Keep looping until you've used up most of the length. Pass the end out through the other hole.

Place a glass cover on the box. Tape the edges to hold it down. You now have a solar collector like the ones you might sometimes see on rooftops. Put the box in the sun. Immerse one end of the tubing in a bucket of water. Suck on the other end to fill the tube and start a siphon action. Keep the end you sucked on lower than the other and let the water trickle into another container. Use a clothespin to crimp the tube and limit the flow to a trickle.

Place a thermometer in each container of water to track the temperature change. Does the angle of the box toward the sun make a difference? What if you use a longer piece of tubing and make more loops? The warmer the water coming out, the more heat it's absorbing from the sun. If you were using water heated this way in your home, you would take the load off your electric, gas or oil water heater, saving energy. [source: Benrey]

You might have seen giant wind turbines spinning on hilltops. Well, with this experiment, you can make your own model turbine to try generating electricity from wind.

Start with a 1.5 volt direct current motor. These battery-powered motors are available from hobby shops or online sources. In your experiment, instead of using electricity to turn the motor, you'll be turning the motor shaft with "wind" in order to generate electricity. Mount the motor horizontally on a board with the shaft extending over the edge.

Take a model airplane propeller and fix it to the motor's shaft, perpendicular to the board. Make sure the propeller fits tightly on the shaft or screws down so that when the propeller turns, it turns the shaft. Your "wind turbine" is ready to generate power.

Attach the two wires coming from the motor to a voltmeter that measures up to 5 volts. Between the motor and the voltmeter, connect these two wires using a 100-ohm resistor. You'll need to remove an inch of insulation from each wire and solder the resistor leads (the wires coming from each end of the resistor) to the bare wires. This setup is needed to allow the voltmeter to accurately measure the electricity.

Place the motor and propeller in front of a fan, which will produce the "wind." When the propeller starts spinning, check the voltmeter. It will show you how much electricity is being produced. If you see no movement, or if the voltmeter needle tries to go to the left instead of the right, remove the wires from the voltmeter and reattach them, reversing the sides. See how the voltage changes as the fan speed increases or decreases.

Experiment with different types of propellers. Do larger or smaller propellers affect the amount of electricity produced? Try designing your own propeller. Experiment with multiple blades and blades at different angles. Which produces the most electricity at a given wind speed? Efficient turbines can harness wind energy and conserve energy from other sources [source: National Renewable Energy Laboratory].

These experiments are intended to teach us about energy conservation principles, but they can suggest practical applications as well. For example, my neighbor has a swimming pool. In the spring, he takes a long length of garden hose and lays loops of it on the roof of his south-facing pool house. It's a lot like the solar hot water experiment. During the day, he uses a pump to run water from the pool through the hose and back in. Solar energy lets him keep his pool a comfortable temperature and he gets into the water earlier than anybody else.