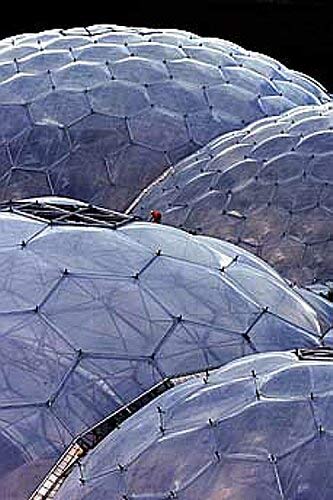 To understand how the Eden Project's super greenhouses work, you first have to understand the fundamental concept of a greenhouse. The most basic greenhouse would be a simple box made out of solid, transparent material, such as glass or clear plastic. When sunlight shines through the transparent walls of the greenhouse, it heats the material inside. Let's consider how this works in a greenhouse with a dirt-covered floor.

Click on the button to see how a greenhouse heats up.

Then what makes the air in a greenhouse hotter than the atmosphere outside? Simply put, there is a smaller quantity of air that needs to be heated inside a greenhouse. In the Earth's atmosphere, there is a mass of air that extends more than a mile (1.6 km) above the ground (at most points). Even giant greenhouses like the ones in the Eden Project contain only a tiny fraction of this air mass. The greenhouse floor can heat its smaller volume of air much more efficiently than the ground outside can heat all of the air contained in the Earth's atmosphere.

The heated air in a greenhouse rises to the ceiling, is replaced by even warmer air and gradually sinks back to the floor. The circulation path is short enough that the sinking air is still relatively warm when it reaches the floor, and so can be heated to an even higher temperature than before. The ground and air absorb enough heat during the day to keep the greenhouse relatively warm all night.

This is the basic idea behind any greenhouse, no matter its size. Most greenhouses function as a controllable environment for plant life. The plants get all the sunlight they need to survive, but they are not fully exposed to the natural elements.

You can't really control air temperature with a simple glass box, because the amount of sunlight varies a good deal from day to day. To maintain the same optimal conditions year-round, a greenhouse needs additional climate-control features. A typical greenhouse will have some sort of venting system, so air can be released when the temperature rises too high, and some sort of heating system, so the air can be warmed when there isn't enough sunlight. Additionally, a greenhouse needs a plumbing system to keep the ground and the air moist.

As you can see, there are a number of elements that go into constructing a greenhouse. In the next few sections, we'll see how the people who built the Eden Project dealt with these issues.