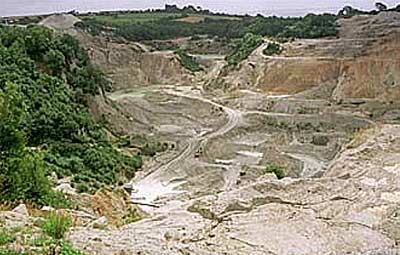 The site chosen for the Eden Project is ideal in many ways -- it receives plenty of sunlight, has a south-facing slope and is relatively accessible -- but in the beginning, it did have a few problems. One of the first obstacles was the ground material. The pit was composed mostly of clay, which does not have the necessary nutrients to support extensive plant life. Before the crew could begin constructing the greenhouses, they had to build up a level of nutrient-rich soil.

They produced this richer soil by mixing clay waste from the area with composted green waste. Composting breaks waste material down to produce a nutrient-rich fertilizer. By combining this fertilizing material with the available dirt, the Eden crew was able to build a rich soil that would have taken hundreds of years to develop through normal geologic processes. In all, the crew produced some 85,000 tons of revitalized soil, more than enough to support the biomes' varied plant life. (See How Composting Works to learn more about the biochemical processes involved.)

In the early days of construction, the Eden Project was hit with another major obstacle: flooding. After two months of heavy rain, some 43-million gallons (nearly 163-million L) of water had drained into the bottom of the pit. In order to build a solid base for the structure, the designers had to find a way to channel the water so it wouldn't erode the ground below. And as long as they were channeling the water, the designers figured, they might as well put it to work.

The domes were built along the north side of the pit, so they would get maximum sunlight from the south.
Photo courtesy Apex Photo Agency, Photographer Simon Burt

The first step was to build a sump, a water-collecting pool under the rich soil. Then they laid a buried layer of matting to channel rain water and any runoff water into this sump. The mat also filtered out most sediments, generating a constant source of clean, filtered water. This water is pumped out of the sump up into Eden's structure, where it is used to irrigate the plants, as well as drive the building's plumbing. This system collects, on average, almost 6 gallons (22.71 L) of water every second -- about 20,000 bathtubs of water every day. The greenhouse ceilings also collect rainwater, sending it to the sprinklers that keep the air saturated.

With the plants, domes, soil and plumbing all in place, Eden is now a fully functioning greenhouse. But its creators still consider it a work in progress. In the next section, we'll find out about some of the additions that are in the works and about the long-term goals of the Eden team.