Consider the humble bandicoot. Or, if you don't know what a bandicoot is, consider a small, pointy-nosed Australian marsupial that looks a little like a furry armadillo, but that gives off the distinct vibe of a weirdly designed stuffed animal intended to be either rabbit, a mouse, or a kangaroo. One can't be sure. Then, consider that this creature you may have heard of for the first time 30 seconds ago comes from a group of animals not only nearing extinction, but unthinkably ancient and the survivor of several extreme climate change events.

More than 20 species of bandicoot and bilby, members of the order Peramelemorphia, live in Australia and New Guinea. They fill the ecological niches occupied in other places by rodents and rabbits — some live in the desert, others in the rainforest, some are herbivorous, while others dine mostly on insects.

But none of the species is doing very well at the moment because of pressures from habitat loss, introduced predators, and poaching by humans. A new study published in Scientific Reports finds that bandicoots are not only more ancient than anyone thought, they're probably no strangers to the pressures and shifts brought on by climate change. Which makes the fact that they're struggling now, after making it through so much for millions of years, even more pressing.

Based on fossils of extinct bandicoots and DNA of modern species, the researchers discovered that between 5 and 10 million years ago, drier conditions on the Australian continent resulted in the extinction of some very ancient bandicoot species — and the rise of the species found there today. And by "very ancient," we're talking some some isolated fossilized bandicoot teeth that may be as old as 50 million years, and entire fossils that may belong to 25-million-year-old species. For comparison's sake, none of today's bandicoot species date back more than about 5 million years.

"While retreating rainforests and spreading grasslands did provide a backdrop for ecosystem change 5-10 million years ago, the Australian fauna likely adapted via changing its distribution rather than undergoing wholesale extinction and replacement," says Dr. Michael Westerman of La Trobe University in Australia, in a press release announcing the study. "This agrees with our results from DNA, which indicate that modern desert-living bandicoot groups pre-date the onset of aridity by as much as 40 million years."

The new study shows that climate change killed off many bandicoot species way back then. And though several made it to today, Australia's mammals and marsupials are vulnerable to human-caused climate change. And it's all about saving the bandicoot, which seems to be having a very difficult time surviving the changes it's currently facing, which also include human hunting, introduced predators and habitat loss:

"Bandicoots, like other Australasian marsupials, probably occupied a range of different habitats over many millions of years," says the study's main author, Dr. Benjamin Kear from the Museum of Evolution at Uppsala University, in the press release. "However, our study has further implications for future conservation. Arid zone bandicoots are amongst the most vulnerable mammals in Australasia today, with multiple species having gone extinct within the last 100 years. By demonstrating their profound evolutionary antiquity we can thus serve to highlight how extremely urgent it is to protect these living fossils as part of Australia's unique biodiversity."

Getting Rid of the Right Stuff: The NASA Space Poop Challenge

5 New Ways Climate Change Is Affecting Animal Life — Including Ours 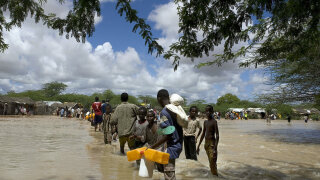