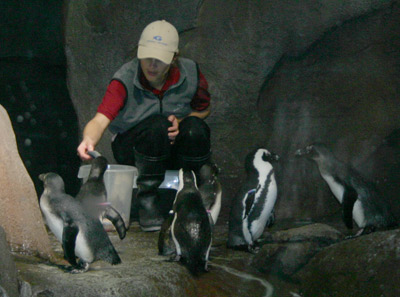 Aquarium staff feed African black-footed penguins. Several beads around the penguins' wings identify them. Males have a blue bead closest to their chest, and females have a pink bead.

Feeding the animals at the Georgia Aquarium is a lot more complex than just sprinkling a little food on the surface of the water. The aquarium staff prepares meals for all of its animals in the husbandry commissary, a specially designed kitchen that is held to higher standards than restaurant kitchens. The United States Department of Agriculture conducts random inspections of the commissary to make sure it is sanitary.

The husbandry commissary has a freezer that holds 20,000 pounds of food as well as a refrigerator that holds 6,000 pounds. The aquarium staff prepares food for the animals every day. Animal diets, amounts of food and the number of feedings per day vary widely from species to species. Some of the animals eat prepared food that resembles what they eat out of captivity, and others eat exactly what they eat in the wild. Many get vitamins or medicines in their food.

Aquarium specialists have access to the tanks to feed the animals, but the huge Ocean Voyager tank presents special challenges. It's roughly the shape of an hourglass, and it houses a wide variety of fish. Along with the whale sharks are species like great hammerhead sharks, sawfish, bowmouth guitarfish, grouper and golden trevally. In order to feed all these fish, the Aquarium uses a gantry crane, which runs on rails over the entire width of the tank. They set up feeding stations for each animal on the crane's platform. These stations let the staff make sure each animal gets the right amount of the right kind of food. As long as they are properly fed, even the most predatory species won't typically feed on smaller fish.

This gantry crane lets the Aquarium staff set up feeding stations for each species of fish in Ocean Voyager.

Feeding the fish high-quality food, customized based on what they eat in the wild and need to thrive in captivity, helps to keep them healthy. If a fish gets sick or injured, the aquarium has a complete veterinary facility and surgery on site. We'll look at these areas of the aquarium next. ­

Dinner at the Zoo

Zoos have a similar system for preparing food and feeding animals. See what a zoo's commissary looks like.