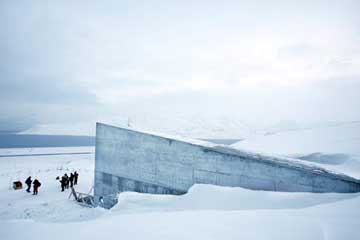 It's easy to imagine the Svalbard Global Seed Vault, which opened in 2008, as humanity's last, best defense against good old-fashioned, planet-trashing disaster. Post-apocalypse, all it would take is a long and dangerous trek to Norway to access a treasure trove of precious seeds tucked away in the Arctic Circle, giving survivors a chance to revive the world's farms and plantations.

But, in spite of being nicknamed the Doomsday Vault, the Svalbard vault's real goal is to protect crop diversity by safeguarding spare seeds belonging to the 1,400-odd seed banks, also called gene banks, around the globe. It's an important step, since many seed banks face threats from political unrest, natural disasters and other potentially perilous circumstances.

This might all sound like a lot of work to protect some seeds, but think about this: Farmers have been saving seeds since as early as 6750 B.C. -- maybe even longer [source: Seabrook]. Having spares helps ensure they'll have future crops, even if Mother Nature has other plans. And while there are hundreds of thousands of known plant species, we use shockingly few -- around 200 -- as food crops. And when you consider only major staple crops, that number plummets to about 20 [source: Seabrook]. With so few species in the mix, a major event wiping out a staple like corn, wheat or rice could cause real trouble.