Seed Banks Around the World 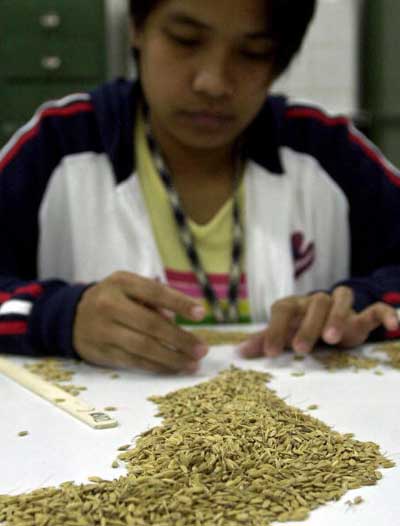 An employee at the International Rice Research Institute (IRRI) sorts out rice seeds prior to deep freeze storage at the IRRI rice germplasm bank in Laguna.
Joel Nito/AFP/Getty Images

As stated earlier, there are more than 1,000 seed banks located all over the world. We obviously don't have the time or space to discuss each one here, so let's focus on a few of the major facilities.

The Svalbard International Seed Vault, also known as the Doomsday Vault, opened for storage in February 2008. It is located deep in the side of a frozen arctic mountain in Longyearbyen, Norway, and can weather any disaster from bombings to earthquakes. The Global Crop Diversity Trust and the Consultative Group on International Agricultural Research (CGIAR) worked together to collect and organize samples from seed banks all over the world to be stored in the underground vault. Researchers chose its location -- remote yet accessible -- because of its climate and geology, both of which are optimal for cold storage [source: Fowler].

Rather than acting as an active seed repository, the Doomsday Vault is a global backup system for the planet's plant resources. The seeds in the vault are stored under "black box" arrangements, meaning that overseers of the vault will never open or test any of the seed packages. In fact, security is so tight that no single person possesses all the codes necessary to enter the vault [source: Rosenthal]. The responsibility for replacements and additions lies solely with the organization that provided the seeds in the first place [source: Global Crop Diversity Trust]. All major banks have contributed seeds, including all banks operated by CGIAR [source: Svalbard FAQ].

The Norwegian government funded the construction of the vault, and the Global Crop Diversity Trust is responsible for the annual operating costs [source: Svalbard FAQ].

The Millennium Seed Bank Project (MSBP) is located at the Royal Botanical Gardens, Kew, United Kingdom. Its goal is to eventually store and protect more than 24,000 global species of plants. It currently stores samples of the country's entire native plant population, including several hundred endangered species [source: Millennium Seed Bank Project Fact Sheet]. The MSBP collaborates with other seed banking organizations around the globe by sharing information or assisting in seed collection. Seeds remain in their country of origin, but the Kew location stores duplicates for backup [source: MSBP].

Public and corporate donations, as well as grants and endowments, fund the MSBP [source: MSBP].

The Vavilov Institute of Plant Industry was established in 1894 in St. Petersburg, Russia, and is the oldest seed bank in the world. Nikolai Vavilov, for whom the institute is named, was a Russian biologist and plant breeder. Vavilov was one of the first scientists to understand the importance of crop diversity and played a major role in raising awareness of the importance of genetic conservation. The institute is the only facility of its kind in Russia. Its global collection contains hundreds of thousands of specimens [source: VIR].

Here is a sampling of other seed banks around the world:

For more information on seed banks and other topics related to plants and farming, read the links below.