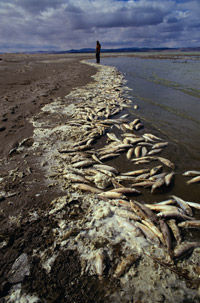 Pollution of a watershed can destroy an entire aquatic ecosystem, including its inhabitants.
Doug Menuez/Getty Images

Now that you know what watersheds are, why should their health matter to you? Watersheds direct­ly affect water quality, whether it's for drinking or recreation. For example, algae blooms from fertilizer runoff draining into water harm watershed health, as do mercury and lead seeping into the water supply due to pollution. As states and cities try to find new sources of uncontaminated drinking water, keeping watersheds healthy becomes increasingly vital to finding clean water [source: Environmental Protection Agency].

Unhealthy watersheds affect wildlife. The polluted water supply that results can become harmful to humans. Aquatic life quickly suffers the effects of watershed pollution, while new pollutants introduced into ecosystems alter wildlife habitats. This reduces biodiversity by eliminating some species and introducing new, invasive ones that destroy the native species. That, in turn, can affect the food chain, from microbial organisms that feed birds and animals to fish that feed humans.

According to the EPA paper "Sustaining Healthy Freshwater Ecosystems," one freshwater ecosystem can be greatly affected by another: "Far from being isolated bodies or conduits, freshwater ecosystems are tightly linked to the watersheds or catchments of which each is a part, and they are greatly influenced by human uses or modifications of land as well as water" [source: Environmental Protection Agency].

The threat of erosion also exists. Water flowing to a stream picks up dirt along the way. If the water picks up enough soil over time, the land along that stream will become unstable and eventually erode away. If you live along a river bank, this could mean losing your backyard. For wildlife that lives in this area, it means a loss of their habitat.

The sharp increase in development around the world may contribute to some of the problems affecting watersheds today. Development in the Amazon Basin has threatened the Amazon river dolphin with extinction [source: Water Resources eAtlas]. Urban development often involves removing plants, artificially changing the surface topography and altering naturally formed drainage networks. All of these factors affect an area's watershed. In addition, manmade land covers, such as asphalt roads or buildings, act as what the United States Geological Survey calls a "fast lane" for rainfall. Rainwater that would have been absorbed by soil and plants instead is sent directly into streams. These fast lanes increase the chances for flooding because more water pools in that area than a stream can hold [source: U.S. Geological Survey].

Read on to learn how we can protect the health of our watersheds.

The EPA co-sponsors World Water Monitoring Day on Sept. 18. Between July and October, people in the U.S. can order a water testing kit, then register your site and data, and help to clean up your watershed. The monitoring period lasts until Oct. 18.