History of the Rosetta Stone 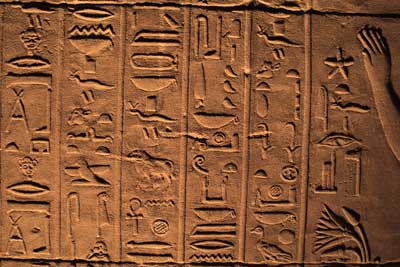 The message recorded on the Rosetta Stone isn't as significant as the languages in which it's written. The stone is dated March 27, 196 B.C., and is inscribed with a decree from Egyptian priests endorsing the pharaoh as a good, humble ruler and respectful worshipper of the Egyptian gods [source: BBC]. Written beneath the decree is a mandate on how the message should be shared: Clearly, the priests wanted to get the word out because they ordered that it be written in three languages and carved into stone.

In itself, the Rosetta Stone is no more remarkable than the other stelae of its time. But its preservation helps us to understand Egypt's past as well as shifting powers during the Greco-Roman period when Egypt was ruled by the Macedonians, Ptolemies and the Romans. The pharaohs, of whom Cleopatra was the last, would be succeeded by Coptic Christians, Muslims and Ottomans from 639 to 1517 A.D. [source: BBC].

These fundamentally different rulers caused changes in all aspects of Egyptian life, and the most apparent evidence of these changes can be found in the written language. New rulers brought new religions, and the old gods were replaced by new ones. As a result, the most sacred of all writing, hieroglyphics, was replaced, too.

By the Ptolemaic Period, when the Rosetta Stone was inscribed, Egyptians had turned to Demotic -- an even more simplified version of hieroglyphics. When the priests commissioned the decree on the Rosetta Stone to be written in three languages, they ensured that all of Egypt would be able to read it [source: Harvard].

And until the fourth century A.D., the Rosetta Stone was perfectly readable. But as Christianity became more widespread in Egypt, hieroglyphics was abandoned for its association with pagan gods. Demotic wasn't a taboo language like hieroglyphics, but it eventually evolved into Coptic. Coptic was based off of the 24 letters in the Greek alphabet as well as a few Demotic characters for Egyptian sounds that weren't represented by the Greek language.

When Arabic replaced Coptic, the last frayed thread to hieroglyphics finally snapped. More than a thousand years of Egyptian history became lost in translation. Egypt made way not only for a new language but also for new politics and religion. The sacred temples inscribed with hieroglyphics no longer had any meaning for the Egyptians or their new rulers, and they were stripped bare and demolished to obtain raw material for new buildings. Among this rubble was the Rosetta Stone, which was rebuilt into a wall.

The Rosetta Stone would later be resurrected as that civilization came down and a new one erected in its place. Only then would its significance be realized. In the next section, we'll learn about the events leading up to the Rosetta Stone's discovery and the lucky accident that revealed the stone.