Discovery of the Rosetta Stone 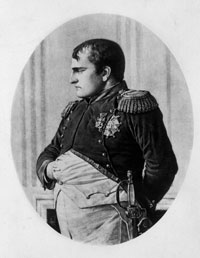 In the late 18th century, Napoleon Bonaparte launched the Egyptian Campaign. The purpose of the campaign was to claim Egypt[ for France -- colonizing the country would give France a greater authority in the East [source: International Napoleonic Society]. Strategically, this would prepare France for domination over the most valuable territory in the East: India. Napoleon strategized that cutting off Britain's access to the Nile River would cripple British troops and their Eastern settlements.

Napoleon didn't just plan a military attack. He prepared for a thorough infiltration of Egypt by assembling a think tank whose job it was to gather information about Egypt's past and present people, environment, culture and resources. Napoleon shrewdly reasoned that to rule a country, one must know everything about it. He called his scholarly squadron the Institute of Egypt, also known as the Scientific and Artistic Commission. It included mathematicians, chemists, mineralogists, zoologists, engineers, illustrators and art historians [source: International Napoleonic Society]. Its purpose was highly covert, and members were ordered to reveal nothing more about their work than that they were acting for the good of the French Republic.

Napoleon and his forces landed off the coast of Egypt at Aboukir Bay in August 1798. The British navy crushed the French and destroyed all of Napoleon's ships. The French were stranded in Egypt for 19 years [source: International Napoleonic Society].

Making the best of a bad situation, the French settled in around the Nile Delta. While the military built forts and conducted reconnaissance, the Institute collected artifacts, explored ruins and became acquainted with the local population. The palace of Hassan-Kashif was overtaken as the Institute's headquarters. Royal rooms were converted into libraries, laboratories and even menagerie -- where harems once danced and entertained, local fauna grazed under scrutinizing eyes.

In the summer of 1799, Napoleon's soldiers razed ancient walls to expand Fort Julien in the town of Rosetta. A soldier noticed a polished fragment of carved stone. Pulling it from the rubble, he recognized that it might be something significant and handed the stone over to the Institute.

The Institute's scholars determined that the stone was some kind of decree and immediately began translations, a long and tedious process. Scholars named the stone the Rosetta Stone, in honor of the town in which it was discovered. They had the foresight to make several copies of the inscriptions, which served them well after the British acquired the stone -- along with several other artifacts -- under the terms set forth in the Treaty of Capitulation [source: BBC]. Both the French and the British knew they had something valuable on their hands, but it would take years to crack the code inscribed on the Rosetta Stone. Only then would its true worth be revealed.

Next, we'll learn about the struggle to decipher the Rosetta Stone.

The Institute of Egypt

The Institute was an essential component of Napoleon's plans for French domination of Egypt. It operated on the premises of a 26-part document that defined its mission as bringing principles of enlightened thinking to Egypt, compiling comprehensive observations and conclusions about Egypt's past and present and serving as an advisory board to the French Republic about matters pertaining to Egypt [source: International Napoleonic Society].