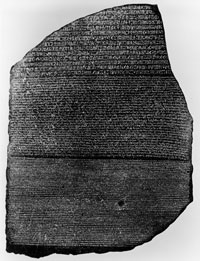 A photograph of the Rosetta Stone from the 1800s.
Hulton Archive/Getty Images

Scholars began attempting translations of the Rosetta Stone as quickly as they could get their hands on it -- or a copy of it. It didn't take too long to translate the Greek and Demotic portions of the text, but the hieroglyphics seemed to be an indecipherable mystery. An intellectual battle over hieroglyphics ensued between a British scholar, Thomas Young, and a French scholar, Jean-François Champollion, both of whom wanted to crack the code first.

Their respective countries were equally as competitive, and even today Britain and France debate about the true victor in hieroglyphic translation as well as which country owns (or should own) the stone. When the Rosetta Stone was displayed in Paris in 1972 for the bicentenary of its discovery, rumors flew that Parisians were planning to secretly steal the stone. The British and French also argued that the portraits of Young and Champollion, displayed alongside the stone, were of unequal sizes, glorifying one scholar above the other [source: Harvard].

The Greek inscription was translated by the Reverend Stephen Weston. He completed his work on the stone in April 1802. While knowledge of the Greek language and alphabet were certainly limited among certain professionals and academics, the Western world had become acquainted with Greek centuries ago, when the Renaissance incited Europeans' interest in the Greco-Roman civilization and culture. Therefore, Weston's contribution stirred less attention than the events that would follow [source: BBC].

Undoubtedly, the hieroglyphic portion of the stone was the most challenging to decipher, but early scholars who translated the Demotic and Greek established some important precedents. French scholar Antoine-Isaac Silvestre de Sacy (who taught a young Champollion linguistics) and Swedish diplomat Johan David Åkerblad each successfully interpreted the Demotic inscription in 1802.

While de Sacy detected proper names -- Ptolemy and Alexander -- in the text and used those as a starting point for matching up like sounds and symbols, Åkerblad's methodology depended on his knowledge of the Coptic language. Åkerblad noticed some similarities between the Demotic inscription and Coptic, and by comparing these similarities he was able to discern the words "love," "temple" and "Greek." Relying on these words to form a skeletal outline of the Demotic alphabet, Åkerblad went on to translate the entire portion.

In the next section, we'll learn about the painstaking process of deciphering the Rosetta Stone's hieroglyphics.

The debate over the Rosetta Stone's ownership has taken a new twist. Egypt has requested that the Rosetta Stone be temporarily returned to its indigenous country for the 2012 opening of the Grand Egyptian Museum. As of April 2007, the British Museum had denied the request, saying it would be too dangerous to transport the artifact. Egyptian curators continue to pursue the loan and remain hopeful that this important piece of Egyptian history will be on display for the museum's opening day [source: National Geographic News].