by Mark Mancini Mar 7, 2019
The massive giant crystals were discovered in 2000 after water was pumped out of the cave by a mining company. Two miners saw the crystals when they entered the drying cave on foot. Penn State University

Gypsum: It's the main ingredient in drywall and frequently added to the water when brewing pale ale and India pales. Humans have been using this mineral for literally thousands of years. But at the turn of the 21st century, the world renewed its appreciation for the stuff when miners discovered some spectacularly big crystals that were — in essence — massive gypsum pillars.

They're buried 984 feet (300 meters) beneath the Sierra de Naica Mountain in Chihuahua, Mexico. Anchored to the walls and floor of a sweltering cave, the crystals went through at least half a million years of uninterrupted growth. Many are long and wide enough to walk across, and honestly look like Superman's Fortress of Solitude.

Don't bother packing your bags, though. Visiting these crystalline wonders is pretty much impossible now. That honestly might be a good thing; for all its splendor, the Giant Crystal Cave once had the makings of a death trap.

Regional fault lines pass right under the Sierra de Naica Mountain. About 26 million years ago, magma started pushing its way toward the Earth's surface through those faults. Ultimately, that process led to the mountain's formation. It also explains the massive crystals.

Giant Crystal Cave is a U-shaped cavity in the limestone below the Sierra de Naica. Roughly 98 feet (30 meters) long by 33 feet (10 meters) wide, it was filled with groundwater for tens of thousands of years. The water was originally driven upward into the opening by a magma chamber that's located deeper in the Earth. This intrusive water contained the mineral anhydrite.

Now at temperatures of 136 degrees Fahrenheit (58 degrees Celsius) or more, anhydrite remains stable. But at lower temperatures, the mineral is liable to dissolve and then reform as gypsum. (That's a reversible transformation, by the way.)

The magma underneath Giant Crystal Cave kept the water in the cave nice and hot. Eventually, however, the H2O's temperature dipped slightly below 136 degrees Fahrenheit (58 degrees Celsius). After that happened, the anhydrate started breaking down, filling the water with calcium and sulfate. The particles slowly began recombining into a kind of gypsum known as selenite.

White-tinted selenite crystals took over the cave. Because the crystals remained underwater — and because the water temperature stayed within a few degrees of 136 degrees Fahrenheit (58 degrees Celsius) — they were able to keep growing continuously.

Granted, the crystals didn't turn into giants overnight. A 2011 study argued that, under the conditions that were available in this cave, it would've taken anywhere from 500,000 to 900,000 years to grow a selenite crystal measuring 3.2 feet (1 meter) in diameter. Nevertheless, over time, a lot of these things attained breathtaking sizes. Many are 13.1 to 19.6 feet (4 to 6 meters) in length. The very largest, meanwhile, are up to 36 feet (11 meters) long and 3.2 feet (1 meter) thick.

In 1794, prospectors discovered silver on the Sierra de Naica Mountain. Before long, troves of lead, zinc and gold turned up as well — and by the mid-19th century, the first mining operations broke ground along the slopes. One day in 1910, the Peñoles Mining Company discovered a wondrous cave just 394 feet (120 meters) below the surface. Much like Giant Crystal Cave, the chamber — dubbed "The Cave of Swords" — was lined with selenite crystals. But these were significantly smaller, only about 8.2 feet (2.5 meters) long at the most.

They probably formed in the same way the bigger crystals down below formed. However, the Cave of Swords apparently cooled down at a much faster rate. This put a cap on how large its selenite spikes could get.

Giant Crystal Cave itself wasn't found until the year 2000. The water was pumped out by the Peñoles Mining Company before anyone realized that it was full of gargantuan selenite columns. Brothers Pedro and Juan Sanchez — two miners with the organization — became the first people to lay eyes on its crystals when they entered the drying cave on foot.

It soon became clear that Giant Crystal Cave was an inhospitable place. Not only did the air temperature climb as high as 113 degrees Fahrenheit (47.1 degrees Celsius), but the humidity levels were also close to 100 percent. The place was so humid that a visitor who lingered too long risked having fluids condense inside his or her lungs. That can be fatal.

NASA discovered microbial life forms trapped inside one of the crystals that may have laid dormant for up to 50,000 years.
NASA/GSFC/METI/ERSDAC/JAROS, and U.S./Japan ASTER Science Team

The Age of Exploration

At first, explorers were limited to 10-minute forays into the cave due to the justifiable safety concerns. But with specially designed cooling suits, teams of scientists were eventually able to slightly prolong their visits. Those who donned the outfits received a supply of chilled, breathable air from attached respirators. Suddenly, excursions lasting 15 to 60 minutes became possible.

NASA Astrobiology Institute director Penelope Boston journeyed into the Giant Crystal Cave in 2008, and again in 2009. She helped discover microbial life forms that had been trapped inside one of the crystals. Suspended in an air bubble, the tiny organisms may have laid dormant for up to 50,000 years before Boston and company came along.

The removal of water from this cave was a boon for the scientific community. Unfortunately, it may have bad news for the actual crystals. In 2017, Peñoles stopped the pumping and allowed groundwater to refill the cave. But before then, the crystals had been exposed to air for nearly two decades. Did that compromise their structural integrity? A series of experiments on gathered samples suggests as much. Now that the water's back, however, these otherworldly crystals might start growing again.

NOW THAT'S INTERESTING
Here's something else you might not realize about gypsum: It's an extremely popular fertilizer, one that provides a ready source of calcium to plants.

How to Wipe Personal Data From Your Car 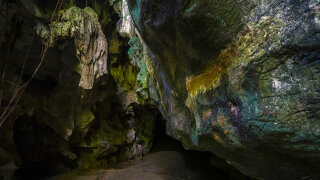 How Do You Survive Getting Lost in a Cave? 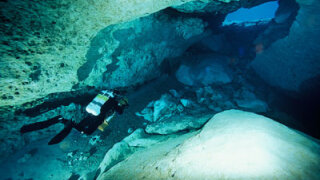