by Julia Layton Aug 9, 2016
As the sky turns fiery shades of pink and purple, visitors watch the lava flowing into the ocean from the eruption of Kilauea, a volcanic crater in Hawaii Volcanoes National Park. Douglas Peebles/Corbis via Getty Images

On July 28, the U.S. Geological Survey raised the alert level for Pavlof, which seemed ready to do it again.

But volcanic eruptions are notoriously unpredictable. The USGS raised the alert level for Pavlof back in May, too, but nothing happened. Hans Lechner, doctoral candidate in geology and engineering sciences at Michigan Technological University, says volcanologists haven't figured out the timing yet.

"A volcano may show all the signs of an impending eruption," Lechner writes in an email, "increased seismicity, high gas flux, surface deformation, but then never actually erupt and over time return to back to baseline levels."

Or, he says, it can show none of the signs of impending eruption, and then erupt.

There are those in the field who muse about going on the offensive — the volcanic "preemptive strike," if you will. The idea is, humans somehow modify the eruption process, either by initiating an eruption under controlled conditions or by downgrading the energy of an impending eruption, to limit the resulting damage.

The energy involved in a volcanic eruption defies the imagination. Italy's infamous Mount Etna spewed about 350 cubic feet (10 cubic meters) of lava per second during its four-month eruption in 1983. Lechner reports that in 1991, Mount Pinatubo's initial blast ejected about 2.4 cubic miles (10 cubic kilometers) of material to an altitude of about 25 miles (40 kilometers).

We have to get past the misconception that a magma chamber is like a fluid-filled balloon or soda bottle that we can gently insert a straw and suck out the lava and gas.
Hans Lechner, doctoral candidate in geology and engineering sciences , Michigan Technological University

Lechner refers to this as "massive amounts of energy." It originates deep inside Earth, where extreme temperatures and pressures can melt rock.

Molten rock, or magma, is lighter than solid rock, so it rises, forming a "magma chamber" that moves upward through Earth's crust. As the volume of magma grows, the pressure in the chamber increases, forcing magma through the volcano's "vents" — tubes formed by prior eruptions, sealed at the surface by a "lid" of rock.

If the pressure gets high enough, and a vent suddenly opens to the atmosphere, the rapid depressurization causes gases to come out of solution, which causes the magma to explode. It spews through the open vent(s) along with volcanic ash (pulverized rock), steam and various gases. In the case of Mount St. Helens in 1980, Lechner says extreme pressure had forced a vent lid to bulge outward (a classic sign of impending eruption), and a landslide took it off.

To modify that eruption, Lechner theorizes, "I suppose humans could have triggered the landslide, or removed the overburden ["lid"] through, say, excavation or even detonating a nuclear device."

But nuking a volcano would be a profoundly stupid thing to do. The volcano would still explosively erupt, on its own schedule, but now with the added horror of nuclear fallout.

Drilling into the magma chamber to release the pressure is out, too. Volcanologist Erik Klemmeti, writing on Wired in 2012, likened that theory to "trying to bleed to death with a needle prick."

And we couldn't avert an eruption by slowly depressurizing the chamber, either.

"We have to get past the misconception that a magma chamber is like a fluid-filled balloon or soda bottle that we can gently insert a straw and suck out the lava and gas," writes Lechner. "We're talking about pressures and volumes of material that are beyond the capacity of man-made equipment."

He says we'd have to drill down several kilometers with massive pipes — hundreds of meters in diameter — to handle the volcanic output that rushes from the chamber. The pipes would have to withstand temperatures above 3,600 degrees Fahrenheit (2,000 C) and pressures "beyond our capabilities to manage and even comprehend."

And then, he adds, there are still the "gases coming out of solution, rapidly depressurizing and violently escaping" to deal with.

Lava, on the Other Hand

Yet, says Janet Babb, geologist with the USGS Hawaiian Volcano Observatory, humanity is not completely without modification options.

"Humans cannot stop or control an eruption," Babb writes in an email, "but [humans] have taken some actions to control products erupted from a volcano."

But attempts to guide lava flows by bombing them have generally failed. Cooling them has shown promise, though: In 1973, when lava from a volcano on the Icelandic island of Heimaey was flowing into towns, officials built barriers to stop its progress and dumped seawater on the lava to cool it down, slow the flow and help it harden. The barriers held against the lower-energy lava flow.

As for exerting control before the lava starts flowing, Lechner says it's "mostly science-fiction daydreaming." No one's looking into it. Volcanology research focuses on advancing methods of monitoring and prediction.

"However," he writes, "it's not absurd to think that our own hubris might encourage us to attempt to modify a volcanic eruption. Humans have a history of large-scale engineering feats that have forever modified the surface of the Earth."

Honey Helps Gymnasts Get a Grip

Stuff You Should Know Podcast: How Volcanoes Work 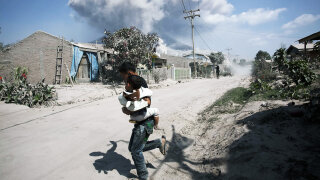 200 Years Ago, We Had a Year Without a Summer