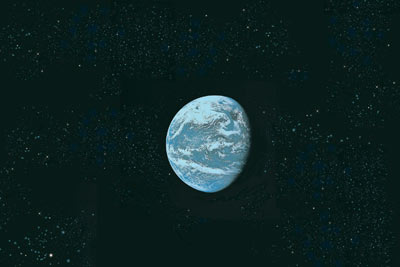 Measuring Earth's weight is derived from the gravitational attraction that the Earth has for objects near it. See more space exploration pictures.
Digital Vision/Getty Images

The interesting sub-question is, "How did anyone figure that out?" It's not like the planet steps onto the scale each morning before it takes a shower. The measurement of the planet's weight is derived from the gravitational attraction that the Earth has for objects near it.

Newton showed that, for spherical objects, you can make the simplifying assumption that all of the object's mass is concentrated at the center of the sphere. The following equation expresses the gravitational attraction that two spherical objects have on one another:

Assume that Earth is one of the masses (M1) and a 1-kg sphere is the other (M2). The force between them is 9.8 kg*m/s2 -- we can calculate this force by dropping the 1-kg sphere and measuring the acceleration that the Earth's gravitational field applies to it (9.8 m/s2).

1It is "more proper" to ask about mass rather than weight because weight is a force that requires a gravitational field to determine. You can take a bowling ball and weigh it on the Earth and on the moon. The weight on the moon will be one-sixth that on the Earth, but the amount of mass is the same in both places. To weigh the Earth, we would need to know in which object's gravitational field we want to calculate the weight. The mass of the Earth, on the other hand, is a constant.

What conditions are required for life?
Fettuccine Rock Could Signal Life on Mars
6 Stone-cold Facts About the Arctic Circle