Who cares who owns the oceans? 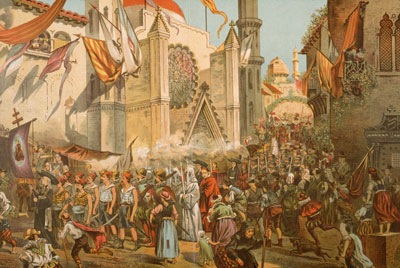 Want a parade held for you? Be the first person to circumnavigate the globe. A posthumous celebration was held in Spain in 1522 to honor Ferdinand Magellan's feat.
Hulton Archive/Getty Images

The Age of Exploration quickly lent itself to an age of colonialism. Europe's nations sailed to ancient and new lands and claimed them as extensions of their own soil. In the process, they warred with other countries for territory and committed genocide against the indigenous peoples already living there. The raw materials found in these new territories offered seemingly limitless wealth for the colonizing nations. But millennia of learning to exploit raw materials had taught Europeans that anything found on land was ultimately finite.

It took slightly longer for this perception to include the sea as well. Humans circumnavigated the globe only in A.D. 1522, but have lived on land for 195,000 years [source: University of Utah]. Because of the immense size of the world's oceans and our technological inability to remove the resources found in and below them, the idea was that we humans are incapable of depleting these resources. That idea changed in the mid-20th century.

Oil exploration and production became increasingly sophisticated, and nations moved to secure as much oil, natural gas and minerals from the oceans as they could. Since there were no formal treaties or international laws concerning oceans, there was little resistance any governments could legitimately offer to encroaching nations. The oceans, which had been everyone's shared property for centuries, were now being carved up without any coherent pattern.

Ironically, the same oil and gas that had been removed from the oceans of the world was now polluting it. Tanker ships carrying cargoes of petroleum and oil occasionally spill their contents into the oceans. Those that make it from point A to point B (with a cargo of oil or otherwise) still leave diesel emissions in their wake.

With most of the ocean considered common property, the fisheries found in these areas are as well. Commercial fishing outfits from any country can send vessels to good fishing spots in international waters. The shared attention depletes these fisheries more quickly, and the heavy traffic in these areas has a disproportionate impact on the local ecosystems. Technology for exploiting oceanic resources developed at a rapid pace. In 1954, maritime oil production was less than one million tons annually. By the end of the 1960s, almost 400 million tons were removed per year [source: UN].

The economic impact and value of the oceans derived from commercial activities like fishing, shipping and mining is enormous. In 2004, the United States alone saw $63 billion in wages paid for oceanic activities [source: NOEP]. The money made from the oceans was having a deleterious effect as well. It became apparent that humans were poisoning the life below the water's surface.

In 1967, the United Nations first entertained the idea of intervening and establishing a formal international treaty, the first new agreement concerning the oceans in 300 years.