The U.N. and the Sea Grab of Today 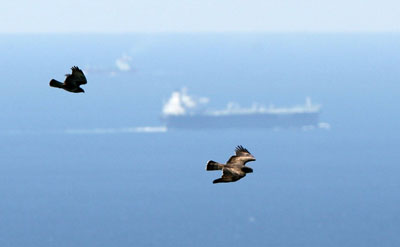 Because of their importance in navigation, straits like the Strait of Gibraltar (shown off the coast of Tarifa, Spain) remain international waters.
Jose Luis Roca/AFP/Getty Images

It was the Maltese delegate to the United Nations who spoke up first, in November 1967, to urge the members of the U.N. to use their collective clout to come to an agreement on fair and responsible use of the world's oceans. It took 15 years, but an agreement was eventually struck from a nine-year conference that produced the U.N. Convention on the Law of the Sea.

The treaty was completed in 1982 and came into force in 1994. Essentially, it codified already established customs, like the Law of the Sea. International waters remained international, "the common heritage of all mankind" [source: UN]. Limitations were set on how much coastal water and seafloor a nation could claim as its own. The territorial sea, that aquatic boundary along a nation's coast that extends its terrestrial boundaries, was set at 12 nautical miles (13.8 miles and 22.2 km).

The convention also set clear definitions for types of waters. Straits, for example, cut through two land masses (usually owned by two sovereign nations) and connect two larger bodies of water. They're usually narrower than the 12-mile territorial sea rule. But due to their infinite value in shipping and defense, providing passageways through land masses, straits have traditionally been viewed as international water, despite their close proximity to sovereign nations' soil. The U.N. maintained the straits' position as international waters.

Other legislation determined by the convention included banning nuclear weapons testing in international waters, establishing a panel on ocean environmentalism, and, perhaps most importantly, creating the concept of exclusive economic zones (EEZ). Territorial waters are extensions of a state's laws and right of defense; EEZs are extensions of a state's rights to resources offshore. The boundaries of an EEZ go well beyond territorial waters, extending 200 miles (322 km) from shore [source: Water Encyclopedia]. All of the organic and mineral resources found in these waters are the exclusive domain of the coastal nation it belongs to.

EEZs presented a discrepancy, however. The United States and other nations in the post-World War II sea grab had defined their waters by the continental shelf, the comparatively shallow area (about 200 m or 650 feet) that extends from shore to the continental slope. This new EEZ restriction of 200 miles (322 km) narrowed other nations' boundaries. The U.N. compromised by allowing nations with wide continental shelves to extend their EEZ up to 350 miles (563 km) from shore, provided nations could prove the width of the shelf offshore.

Coastal nations have since moved to find geological evidence which extends their EEZs from 200 to 350 miles (322 to 563 km). In the Arctic Ocean, a new sea grab like the one ignited by the United States in 1945 is in full swing among the U.S., Canada, Greenland, Denmark, Norway and Russia. All of these states are scrambling to establish sovereignty over the ocean floor in the Arctic since an estimated 25 percent of the yet-untapped oil and natural gas stores left on Earth are thought to be locked beneath the ocean floor there [source: Geology].

The sudden interest in the Arctic reserves is fueled by melting arctic ice, ostensibly the result of climate change. As the Arctic ice melts, accessibility to the minerals below becomes easier and thus cheaper. But that melting ice will have another impact -- this one on shorelines. Rising sea levels will push shores inland and pull the sovereign boundaries of these nations farther out of the Arctic and away from its resources. Once this occurs, a new U.N. convention may be in order, since nations have shown that when it comes to the oceans' natural resources, skirting the rules is fair game.