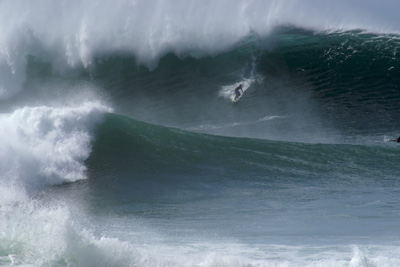 Even waves less impressive than these carry an enormous amount of energy.
Norbert Wu/Science Faction/Getty Images

"This'll be a piece of cake," you think to yourself as you take a surfboard out for the first time. But after a­bout the tenth wipeout, you begin to see bruises and realize just how unruly and powerful ocean waves are. Indeed, surfing fatalities remind us how aggressive waves can be. But this brawny wave power is exactly what some scientists hope will wean the world off fossil fuels.

Take a look at a globe and you'll quickly notice that dry land is in the minority on this planet -- water, in fact, covers most (about 70 percent) of the Earth's surface. It's certainly a tantalizing prospect to think that we could gather usable energy from the natural forces at work on water's surface.

Wave energy refers to the harnessing of the Herculean power of water waves. Waves hold a gargantuan amount of untapped energy, some of which we can use to power at least a portion of the world's everyday electricity. Though estimates vary about how much power waves could contribute to the world's energy consumption, some say it could realistically contribute about 10 percent [source: OEC].

Theoretically, however, this is not even close to the amount of energy ocean waves could provide. Indeed, only about 0.2 percent of the energy in ocean waves could power the entire planet [source: Drollette]. Given this knowledge, one might wonder why people aren't paying more attention to and investing in the development of wave energy.

The tough part is coming up with ways to turn this power into usable energy. In this article, we'll investigate the different methods engineers have developed for gathering wave energy. But first, it's important to know just how waves get this energy in the first place.

When learning about waves, it's a good idea to know these common terms: 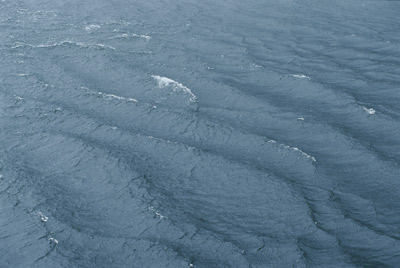 As wind hits the water, ripples form. Then, wind gets an even better grip and continues to push the ripples until they grow to be large waves.
Carsten Peter/National Geographic/Getty Images

Wave energy, in one sense, is just another form of solar energy. This might sound odd, but just consider that waves start from wind, which forms as a result of the sun's heating of the ­Earth.

The sun doesn't ever heat the Earth evenly. Depending on the Earth's natural formations as well as its orientation to the sun, some spots get heated more than others. As some air gets heated, it becomes less dense, and thus lighter, and naturally floats upward. This leaves an open space for denser, colder air to rush in and take its place. This air rush is the refreshing cool breeze you feel on a sunny day.

Wind is also responsible for our very powerful waves. As wind rushes up along the water, the friction causes ripples. Wind continues to push against these ripples in a snowball effect that eventually creates a large wave. Essentially, this action is a transfer of energy from the sun to the wind to the waves.

A few factors determine how strong an individual wave will be. These include:

Interestingly, waves move energy, not water, far distances. Water works as the medium through which kinetic energy, or energy in motion, passes. The water is moving, of course, but only in a circular motion. In other words, water particles work as rollers in a conveyor belt do -- they rotate in order to move the belt on top forward, but they themselves don't go forward in the process. This is why buoys will rise and fall in a vertical motion with the water.

But if we already have wind turbines to harness wind energy, why use ocean waves? Though they may seem like an unnecessary middleman, waves have a few advantages over wind when it comes to gleaning usable energy. For one thing, ocean waves are dense with energy. In other words, whereas wind might take up a lot of space to contain some energy, waves can collect a great amount of energy and pack it into a small space.

Another advantage is that ocean waves are reliable -- we can more easily predict which way the waves will be moving than which way the wind will be blowing. Also, wind can start a wave and then on its own, the wave can travel a great distance. Large waves that travel far from their origin are called swell waves. This means that the entire surface of an ocean can collect energy, and without us doing any work, the waves come to us, even from very far away.

Now that we know how waves gain their energy, let's take a look at how we can collect that energy.

Although wind causes the powerful surface waves that we use for wave energy, the moon's gravitational pull is responsible for the tides, which is the rise and fall of the oceans twice a day. Tidal energy, distinct from wave energy, also holds energy potential. It could contribute about 3 percent to the U.S.'s energy needs, and more for the U.K. [source: Holzman]. "Tidal wave" is a misleading term and has to do with an underwater disturbance rather than tides. 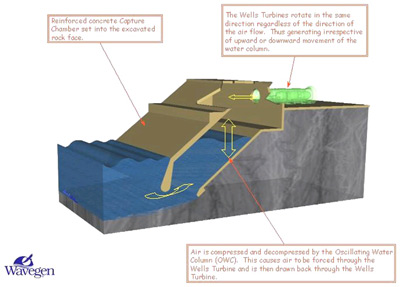 In this diagram of an OWC, notice the only outlets are at the bottom, where waves come in an out, and at the top, where a narrow passage connected to a turbine lets air in and out. As waves push air, the air rushes through the turbine passage.
Wavegen

The idea of harnessing energy from the ocean's waves was tossed around for a couple hundred years. But it wasn't until the oil crisis of the 1970s that it started to gain some significant attention [source: CRES]. The concept resurfaces whenever oil prices rise.

Terminator: Wave energy devices oriented perpendicular to the direction of the wave, are known as terminators. These terminators include a stationary component and a component that moves in response to the wave. The "stationary" part could be fixed to the sea floor or shore. It must remain still, in contrast to the movable part. The moving part works kind of like a piston in car -- moving up and down. This motion pressurizes air or oil to drive a turbine.

An oscillating water column (OWC), shown in the image above, is a terminator. OWCs have two openings -- one on the bottom that allows water to enter the column and one narrow passage above to let air in and out. As waves come and fill the column with water, this pressurizes the air inside, which forces the air through the opening above. The air encounters and drives a turbine. Then, as waves pull away, water rushes out, which sucks more air back down through the top, driving the turbine again.

Another terminator, an overtopping device, includes a wall that collects the water from rising waves in a reservoir. The water can escape through an opening, but while passing through, drives a turbine. The most famous kind of terminator, however, is truly the Schwarzenegger of WECs. Salter's Duck includes a bobbing, cam-shaped (tear-shaped) head that drives a turbine. Though not fully realized, theoretically, this device would be the most efficient WEC.

In this diagram, you can see how an overtopping device works. After waves topple over a wall into a reservoir, the water drains out of an outlet, where it drives a turbine.
Wave Dragon

Attenuator: These devices are oriented parallel to the direction of the wave. One of the most well-known examples of this is the Pelamis, a series of long cylindrical floating devices connected to each other with hinges and anchored to the seabed. The cylindrical parts drive hydraulic rams in the connecting sections and those in turn drive an electric generator. The devices send the electricity through cables to the sea floor where it then travels through a cable to shore.

Point absorber: These devices aren't oriented a particular way toward the waves, but rather can "absorb" the energy from waves that come from every which way. One such device is called the Aquabuoy, developed by Finavera. In a vertical tube below the water, waves rush in and drive a piston, a buoyant disk connected to hose pumps, up and down to pressurize seawater inside. The pressurized water then drives a built-in turbine connected to an electrical generator [source: Finavera]. Many Aquabuoys can send electricity to a central point. From that point, electricity is sent down to the seafloor and then to shore via a cable.

Several WECs grouped together, such as Pelamis or Aquabuoy structures strung together, make up a wave farm.

On the next page we'll investigate some of the struggles involved in getting wave energy afloat in today's economy. 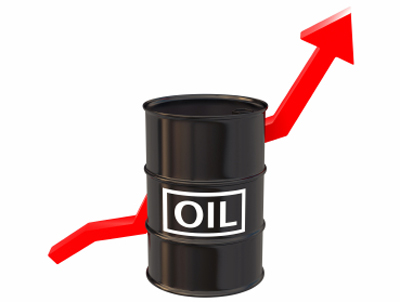 Even as the price of oil rises, the cost of wave energy must become much cheaper to compete with it.
iStockPhoto

As we mentioned earlier, some estimates say today's wave energy technology could possibly fuel 10 percent of the planet's energy consumption. In theory, however, if wave energy technology advances considerably, it might someday do a lot more. As we saw on the previous page, engineers are trying several different methods, and still no single method achieves high-efficiency energy conversion. One of the design dilemmas with wave energy is that wave frequency is too low to run turbines very effectively [source: Chauhan].

Not only that, but these devices must be cheap enough to make it worth our while to develop and use them. If wave energy is never as cheap as fossil fuels like coal and oil (even as costs rise) or nuclear energy, it will have a hard time becoming a significant contender in the energy battle. Indeed, in Europe during the oil crisis of the 1970s, proponents for wave energy competed with nuclear energy proponents for grants, and lost, which is why some wave energy research programs ended. The investment in nuclear energy seemed more promising than wave energy.

However, even this 10 percent is a large amount if we consider that only certain areas of the world are naturally fit for capturing wave energy. Because we need consistent and energetic waves to power the WECs, the best zones for setting up wave power are those that lie between 30- and 60-degree latitudes [source: EUOEA]. For the U.S., the shores of Oregon prove to be the most practical places. Scotland, which is hit with strong waves, is a hotbed for testing and implementing wave energy methods. And, Portugal has been working on the world's first wave farm, utilizing Pelamis devices.

Even though waves are in some ways more reliable than wind, we can't always depend on lots of wave action, meaning we need effective energy storing methods. On the other hand, sometimes waves and weather are far too harsh for wave energy devices to withstand. So, not only do we need more efficient WECs, but they need to be incredibly durable, which can drive up the price.

Wade around the links on the next page to find out more about the ocean and alternative energy.