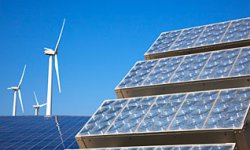 How much do you know about the advances in the electric power industry?
DCI

Would you buy a home without functioning power outlets? We've come to depend on electric power for many of our day-to-day activities. When there are outages, we feel the impact of that dependency, followed by a sense of relief when the power's back on again.

Electricity has helped us stay healthier, work more efficiently and live life around the clock. Because electricity has had such a positive influence on our lives, science and industry researchers are constantly finding ways to provide electric power more easily and inexpensively. As a result, innovations in electric power have made the industry cleaner and more efficient throughout its history, and made electric service available to millions of homes.

This article includes our top five picks from those innovations. We'll look at technology targeted to certain energy resources, and we'll check out the core components that give you access to those resources. To kick things off, let's look a current innovation for a long-used renewable resource.

For millennia, people have harnessed the power of the wind to accomplish tasks. For example, merchants once relied on the wind to sail the world. Also, old windmills, once used to mill cereals, are an iconic part of Holland's landscape. With our lives centered around electricity, modern scientists have found innovative ways to convert the kinetic energy from the wind into electric power.

Today, around the world, the wind-electric turbine is becoming as iconic as the Dutch windmill. A wind turbine typically consists of a large, three-bladed propeller, called a rotor, atop a tower that's high enough that nothing blocks it from the wind. The turbine has a drive train similar to a car's engine that includes an electric generator. The electricity generated gets added to the electric grid, which powers hundreds of homes and businesses in a geographic location.

One small wind turbine can power a single home or small business. These smaller versions have rotors between 8 and 25 feet (2.4 and 7.6 meters) in diameter and can stand up to 30 feet (9.1 meters) in the air. Wind farms are becoming increasingly common in large open spaces. You can see some of these farms during a drive or flight through the Western United States, with thousands of giant white wind turbines stretching across hillsides as far as the eye can see.

Next, let's look at another innovation creating electricity from the kinetic energy from nature.

Hydroelectric dams are the oldest technological innovation in our countdown. During the early 1900s, 40 percent of the electricity used in the United States came from hydroelectric dams. Today, hydropower accounts for nearly a quarter of all electricity used worldwide. In addition, the physical structures themselves are marvels of human engineering and construction, drawing photographers and tourists, according to the U.S. Bureau of Reclamation.

Hydroelectric dams work by holding back massive amounts of water and allowing a limited amount to flow through the dam. The water pressure created by limiting this flow is tremendous, and hydroelectric plants harness this pressure to turn turbines attached to electric generators. As with wind turbines, the electricity generated from a hydroelectric dam is added to the electric grid associated with the dam's geographic location.

A hydroelectric dam supplies the electric grid with several hundred kilowatts to several thousand megawatts of electricity per second. The Unites States National Renewable Energy Laboratory states that the largest damns in the world can generate around 10,000 megawatts, enough for millions of people to use.

Despite its age, the future is bright for hydropower as the hydroelectric dam gets a 21st-century makeover. Researchers are finding ways to improve the efficiency and environmental impact of hydropower by improving existing dams and building new dams.

Nanogenerators: Using the Power Within Us

While wind and water movement can power many homes, nanogenerators use your body's movement to produce electricity on a smaller scale. Nanogenerators are tiny devices with a piezoelectric material, meaning the material creates an electric current just by bending or stretching it. This power could come from the subtle of movements, like a heartbeat or lungs expanding and contracting. Eventually, nanogenerators might be used to power pacemakers, eliminating the need for repeated surgeries when batteries fail. In the near future, look for nanogenerators available in clothing, allowing you to power your portable music player just by breathing and moving.

While wind and water can be used to generate power through movement, the sun provides a significant amount of energy in the forms of heat and light. Solar cell technology, called photovoltaic (PV) cells, convert that light into electricity. These PV cells contain semiconductor materials such as silicon. Electrons in the semiconductor move when the material absorbs the light.

Unlike the water and wind power technologies we've covered, solar cells are versatile in size and portability. Large solar panels with hundreds of cells can be built in a factory then sold to stretch out across land or mount on a rooftop. These large panels are used to power homes and businesses and must be replaced after about 30 years. Small solar panels with only a few cells gather enough energy to power standalone devices, like calculators and outdoor lighting.

Despite being a clean, renewable energy source, sunlight alone isn't sufficient for those who want to use electricity at night or on cloudy days. In most cases, solar panels are a supplemental power source for a building that's already attached to the electric grid. A few people, though, choose to go "off the grid" entirely and use rechargeable batteries to store solar-generated electricity when the sun's not shining.

So far, we've looked at innovations that make the most of renewable energy sources. Next, we'll look at an innovation making use of the most efficient non-renewable source of energy known today.

Nuclear fission is the process of breaking apart an atom, releasing the energy that holds the atom together. In the 1950s, nuclear fission of the radioactive isotope uranium-235 made energy cheaper and more efficient to produce. A nuclear reactor is a structure that produces this fission process from uranium-235. Nuclear power plants include one or more reactors along with large and complex mechanisms for cooling and containment.

The nuclear reactor itself is the key innovation here. The reactor controls the fission process from a very small amount of uranium-235 and channels the energy to heat rods which, in turn, heat water to produce steam. The steam moves a turbine and turns an electric generator, similar to the way wind and water turbines work. So, in essence, a nuclear plant is just a steam plant powered by its nuclear.

By using nuclear power, the world uses less of other resources, like coal and oil, to heat the water and produce steam. Despite this advantage, concerns still plague the minds of skeptics. Concerns include the safety of people who live and work in and around nuclear plants and the potential hazards of nuclear waste disposal. In addition, several notorious nuclear reactor disasters around the world have tainted the reputation of this energy source.

None of these great innovations in electric power would be widely available without the top innovation in our list. Let's check that out now.

Topping our list of innovations is the grid itself. When people say "the grid," they're referring to a network of electric power resources covering a certain geographic area. Some grids are attached to other grids to share resources in case of emergency. Most people who use an electric power source attach to an existing grid through power lines.

A grid is a massive electric infrastructure consisting of power lines, power stations, substations and transformers. Grids in the United States are controlled by a combination of public and private entities. The public entities are the state and federal bureaucracies that enforce laws regulating the industry. The private entities are utility companies that provide access to a grid and meter the power used by each home or business. These controlling forces determine the price a user must pay for each kilowatt hour of electricity on that grid.

Grid technology continues to expand even as people look for other energy sources to fill it. For example, smart grid technology is under development to improve efficiency in how power is monitored and metered for each customer. Also, grid storage at stations and transformers can also keep energy in reserve to help prevent blackouts during some of the grid's normal operational hiccups.