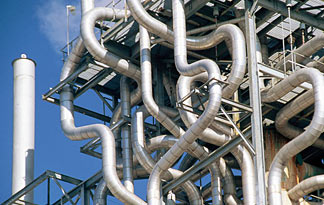 Coal is best known for its role supplying electricity throughout the United States—nearly half of the country's electricity comes from coal. But while the vast majority of it is burned at conventional coal-fired power plants, coal is also turned into a gas for conversion into electricity, hydrogen, and other energy products.

The U.S. Department of Energy explains that coal gasification is a thermo-chemical process in which the gasifier's heat and pressure break down coal into its chemical constituents. The resulting "syngas" is comprised primarily of carbon monoxide and hydrogen, and occasionally other gaseous compounds.

Proponents of coal gasification say that syngas can be used for electricity production, used in energy-efficient fuel cell technology, or as chemical "building blocks" for industrial purposes. The hydrogen can also be extracted for use in fueling a hydrogen economy. But these developments are ongoing, and researchers continue to focus on improving coal gasification technology to realize these and other potential applications for the future.

Coal gas can also be converted into a transportation fuel as a substitute for gasoline in vehicles, but it is far less efficient than the current production and burning of petroleum-based gasoline.

Coal gasification is said to have greater efficiency than conventional coal-burning because it can effectively use the gases twice: the coal gases are first cleansed of impurities and fired in a turbine to generate electricity. Then, the exhaust heat from the gas turbine can be captured and used to generate steam for a steam turbine-generator. This is called a combined cycle, and DOE says a coal gasification plant using this dual process can potentially achieve an efficiency of 50 percent or more, compared with a conventional coal power plant, which is often just above 30 percent.

Poo-pyrus: Eco-friendly Paper Made from Poop
450 Huge Geometrical Earthworks in the Amazon Hint at Past Civilizations
What are eco-plastics?