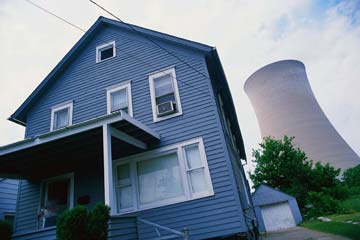 Installing your own nuclear power plant in your backyard isn't an option, but imagine if even a portion of your electrical needs could be met locally.
Joe Sohm/Digital Vision/Getty Images

Once upon a time, there was a kingdom ruled by an all-powerful king. Each day, the King would visit the villages in his domain, bringing every household the wonders of daily life: cold meats and cheeses, artificial lighting, air conditioning and the complete filmography of Vin Diesel on a high definition plasma screen.

So the people watched "Chronicles of Riddick," snacked on fruit pops and reveled long into the night. However, with each passing month, the King demanded a timely -- and costly -- tribute from his people, often raising the prices of this monetary token for seemingly no reason. Then one day when the King came by, he brought none of the glorious gifts they'd grown to depend on -- not even a bag of frozen peas or a screening of "The Pacifier."

When the people asked the king what had happened, he told them that a tree had fallen over on a power line in a village on the far side of the kingdom. While the people didn't think this was exactly fair, what could they do? Who would bring them such fine electric gifts if not the King? It wasn't as if they could make these things themselves.

This scenario resembles what has long been the relationship between the average U.S. resident and the power grid that supplies his or her electricity. For decades, we've depended on an outdated, centralized system that wastes power and occasionally fails to meet everyone's needs. In 1996, for example, a damaged power line in Oregon left 12 million customers in eight states without power. Yet, as is typical under tyrannical rule, there hasn't been a lot of choice in the matter. Electricity has remained the exclusive domain of wholesale power companies with virtually no retail competition for the customers' money.

The idea of the microgrid is changing all this, however. The villagers in our example have concocted a scheme to produce their own power and build their own local seat of electrical clout. Maybe the King will be a little more reasonable about how he divvies the fruit pops now.