The Independence of Localized Power Grids 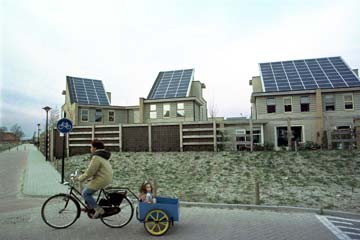 This environmentally friendly housing community in the Dutch town Amersfoort demonstrates some of the solar technology that could power a microgrid.
AP Photo/Serge Ligtenberg

Fortunately for the American public, the move toward a more dependable and efficient power grid isn't a mere grassroots movement. The U.S. Department of Energy is currently pursuing a strategy to create a smart grid, an automated, cleaner and less-centralized means of meeting the nation's energy demands. For more information on this undertaking, read "How the Smart Grid Will Work."

The idea of a localized power grid or microgrid fits into this overall strategy in several key ways. First, the more power produced on a local level, the less a community will need to import from outside power plants or leech off the network. Many of the nation's energy woes are due to the electrical equivalency of a run on the bank. Temperatures suddenly skyrocket, so more people crank up the air conditioning -- which puts a huge drain on the grid. If there's not enough to go around, then not everyone gets power -- at least until sufficient energy becomes available elsewhere on the grid.

Think of a home garden: The more produce you grow in your backyard, the less you're going to need to buy from the grocery store. And if you have enough tomatoes on hand or produce prices at the store become ridiculous, you could simply quit going to the grocery store. You might even be able to sell your excess crop to a local farmer's market. Now imagine doing all of this with homespun electrical energy.

Naturally, the key enabler to all of this is technology. Fuel cell, micro tube, reciprocating engine, solar cell and wind farm development have reached the point where a small network of assorted generators can provide power to neighborhoods, retail areas and even industrial facilities. In a microgrid-enabled future, you might not have to drive to the hydroelectric dam one state away to see where your electricity comes from. Instead, you might find the source in the refrigerator-sized micro turbine behind your house and in the wind farm on the outskirts of town.

One particularly interesting concept involves driving home in the evening and plugging your electric car into an outlet. Oh, but you wouldn't be using the microgrid to charge your car; you'd be using your car to charge the microgrid. This approach is called vehicle to grid technology.