How can the ocean give us clean energy? 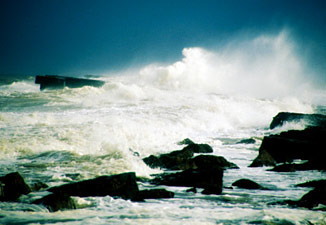 In the face of increasing energy demands and increasingly problematic energy sources, the appeal of using the ocean to generate power is obvious: Water covers more than 70 percent of the Earth's surface, and it's not going anywhere any time soon.

And, like the wind and the sun, the ocean -- its waves, tides and temperature gradations --can be harnessed to generate clean electricity, with no emissions or byproducts to manage.

Ocean energy taps into the power of interactions between oceans and the wind (wave energy), the moon (tidal energy), and the sun (thermal energy). The technologies are pretty far behind wind and solar as far as large-scale generation goes, but the potential is huge -- and growing.

Tidal energy, for one, is already powering homes and businesses.

The moon's gravitational pull on a rotating Earth results in tides -- ups and downs in water level. These fluctuations mean water is moving, and moving water means kinetic energy. There are several approaches to turning this tidal energy into electricity, including tidal fences, tidal barrages (like dams) and freestanding tidal turbines. Each takes a different route to the same end: using the movement of the tides to spin turbines, or electromechanical generators. As tidal undercurrents pick up, tidal fences channel all of that movement through fence-mounted turbines. Barrages trap high tide waters in dam-type configurations, releasing it through turbines when the tide ebbs. And tidal turbines sit on the sea floor, placed in the path of the most powerful tidal currents to catch the energy in the ebb and flow.

Wave energy taps into a different ocean-based kinetic energy: The movement of waves at the surface, created by wind. If you've ever been body surfing, you know there's power in those waves. To harness it, stationary systems use the up-and-down movement of waves to operate a piston, which in turn runs a generator. This motion can also run systems riding on top of the waves like buoys, which have motion-activated generators inside. A different type of wave-energy device consists of a chamber filled with air. As waves fill that chamber, they force the air out, through a turbine.

Heat has energy, and there is a huge amount of heat from the sun stored in the ocean's surface waters. This solar energy can be turned into mechanical energy through the spinning of a turbine. One way to release this energy is by using it to vaporize a liquid, like ammonia, that has a low boiling point. A pressure change causes the vapor to expand, at which point it can spin a turbine. Other systems create a low-pressure environment so that the heat in the water actually causes it to boil, creating steam that can operate a turbine.

The promise of ocean-based clean energy is huge: If OTEC alone were instituted on a commercial scale, it could supply far more than our daily energy needs. But that's a big "if." Ocean-energy is still in its infancy.

But testing is underway. The world's oceans are in fact generating electricity, and they could someday give us all the clean, renewable power we need to run our lamps, our heat, our traffic lights, our cell phones, our iPods and more.

We've Finally Recorded the Hum at the Bottom of the Sea
Niagara Falls Will Temporarily Stop Gushing in 2019
Do People Still Die in Quicksand?