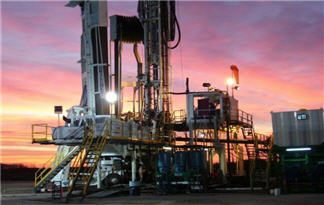 How much do you know about the oil drilling process?
DCI

Remember those orange juice commercials? The ones where people tried to poke a rolling orange with a straw? It's easy to think of the oil drilling process like that: Difficult to find the bullseye for the straw, but just a matter of sucking up the juice once it's stuck. Unfortunately, the whole thing is considerably more complicated -- and dangerous.

The process begins by drilling a hole deep into the earth. To do this, a long bit attached to a "drilling string" is used. The bit varies in diameter from five to 50 inches. After each section is drilled, a steel pipe slightly smaller than the hole diameter is dropped in and often cement is used to fill the gap.

This "casing" is used to give some structural integrity to the hole and to isolated high-pressure areas of rock that can explode if allowed to release.

The drilling process is, not surprisingly, unlike using a power drill on a piece of wood. The most prominent difference is that the he hole is filled with "mud" -- a mixture of fluids, solids and, chemicals -- that lubricate the bit and help move the broken rock out of the way.

As the bit moves deeper, new sections of pipe are added to the "string." These are screwed on to the topdrive at the surface in a process known as "making a connection."

Once the hole has been drilled, it must be "completed" or prepared for extraction. Usually, this involves perforating the casing so oil or gas can enter the tube. Sand or gravel is often added to the bottom most reservoir to act as a screen.

Fluids -- often high-pressure water or an acid -- are then pumped through to clean and fracture the rock, encouraging it to begin releasing hydrocarbons. The main reservoir is then sealed off and connected to the surface with smaller diameter tubing.

The most important phase of drilling "at least from the prospective of the drillers" is the production phase. This is the period during which oil or gas is actually pulled from the ground.

For most wells, the pressure inside the reservoir is enough to push the oil or gas to the surface. In more depleted areas, however, some other means -- like a pumpjack -- is necessary.

A well does not die, but rather reaches its "economic limit," the point at which the oil or gas coming out of it no longer covers the costs associated with operation. When this happens, tubing is removed and cement is pored to ensure hydrocarbon reservoirs remain separate from water and the cut off from the surface.

The pump head is then excavated and removed, a cap is welded in place, and the whole thing is buried.

With so many steps taking place down relatively narrow holes deep below the earth's surface, there is a lot of room for accidents to happen. As proven reserves shrink and become more difficult to replace, drillers are forced to search for deeper and less reliable sources of hydrocarbons and these places are often more difficult and dangerous to drill.