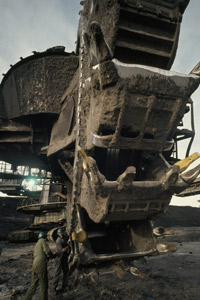 ­Close­­ your eyes and imagine a tar pit. What comes to mind­? For many of us it's a black, molasseslike lake with preserved saber-toothed tigers.

Tar pits are better known as oil sands, tar sands and bituminous sands, and they aren't only of interest to scientists -- they're also of great interest to energy companies. But just like the name suggests, this black gold doesn't gush from a geyser; it's actually in the sand itself.

Oil sands are a mixture of roughly 90 percent clay, sand and water, with 10 percent bitumen [source: Grist]. The dark, sticky sands look similar to topsoil, are viscous when warm and freeze as solid as concrete in cold temperatures. But calling them "tar" pits or "tar" sands is misleading -- the thick black substance isn't tar, but rather bitumen. Bitumen is composed of a mixture of hydrocarbons. It's petroleum that exists naturally in a solid or semisolid state, but unlike conventional petroleum, which is in natural liquid form, bitumen needs to be separated from the sand before it can be used.

­More th­an 2 trillion barrels of the world's petroleum lies in oil sands, though most will never be dug and processed because it's too deep [source: Grist]. Oil sands are found worldwide, from Canada to Venezuela and, as you might imagine, in the Middle East. Alberta, Canada, has a booming oil-sand industry -- as many 1 million barrels of synthetic oil are produced there every day, 40 percent of which comes from oil sands [source: Oil Shale & Tar Sands Programmatic EIS Information Center].

It's estimated that Alberta may have as much as 300 billion barrels of recoverable oil, as well as exponentially more that can't be tapped until the development of new technologies for retrieval. That volume means that Canada is one of the largest oil producers in the world, second to Saudi Arabia [source: Wired].

­How do you go about straining oil from sand? Next we'll look at how bitumen is extracted, processed and transformed into some surprising products you use every day. 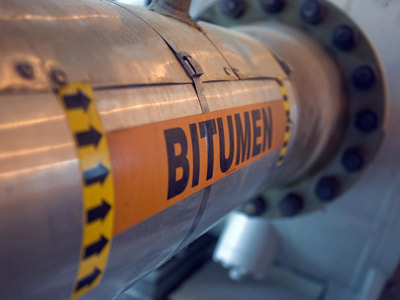