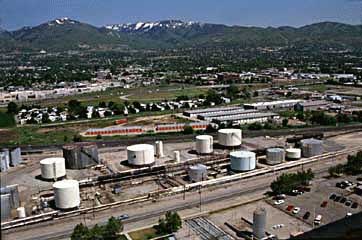 ­I­n movies and television shows -- Giant, Oklahoma Crude, Armageddon, Beverly Hillbillies -- we have seen images of thick, black crude oil gushing out of the ground or a drilling platform.­

But when you pump the gasoline for your ­car, you've probably noticed that it is clear.

And there are so many other products that come from oil, including crayons, plastics, heating oil, jet fuel, kerosene, synthetic fibers and tires.­

­How is it possible to start with crude oil and end up with gasoline and all of these other products?­

In­ this article, we'll examine the chemistry and technology involved in refining crude oil to produce all of these different things.

­Crude oil is the term for "unprocessed" oil, the stuff that comes out of the ground. It is also known as petroleum. Crude oil is a fossil fuel, meaning that it was made natural­ly from decaying plants and animals living in ancient seas millions of years ago -- most places you can find crude oil were once sea beds. Crude oils vary in color, from clear to tar-black, and in viscosity, from water to almost solid.

Crude oils are such a useful starting point for so many different substances because they contain hydrocarbons. Hydrocarbons are molecules that contain hydrogen and carbon and come in various lengths and structures, from straight chains to branching chains to rings.

There are two things that make hydrocarbons exciting to chemists:

The major classes of hydrocarbons in crude oils include:

­To see examples of the structures of these types of hydrocarbons, see the OSHA Technical Manual and this page on the Refining of Petroleum.

Now that we know what's in crude oil, let's see what we can make from it.

On average, crude oils are made of the following elements or compounds:

The oil refining process starts with a fractional distillation column.

Different hydrocarbon chain lengths all have progressively higher boiling points, so they can all be separated by distillation. This is what happens in an oil refinery - in one part of the process, crude oil is heated and the different chains are pulled out by their vaporization temperatures. Each different chain length has a different property that makes it useful in a different way.

To understand the diversity contained in crude oil, and to understand why refining crude oil is so important in our society, look through the following list of products that come from crude oil:

Kerosene - fuel for jet engines and tractors; starting material for making other products

You may have noticed that all of these products have different sizes and boiling ranges. Chemists take advantage of these properties when refining oil. Look at the next section to find out the details of this fascinating process.

Test your knowledge of oil and oil production with our ­Oil Shale Quiz. 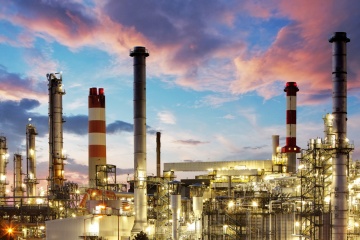 As mentioned previously, a barrel of crude oil has a mixture of all sorts of hydrocarbons in it. Oil refining separates everything into useful substances. Chemists use the following steps:

The products are stored on-site until they can be delivered to various markets such as gas stations, airports and chemical plants. In addition to making the oil-based products, refineries must also treat the wastes involved in the processes to minimize air and water pollution.

In the next section, we will look at how we separate crude oil into its components.

Fractional distillation is useful for separating a mixture of substances with narrow differences in boiling points, and is the most important step in the refining process.

The oil refining process starts with a fractional distillation column. On the right, you can see several chemical processors that are described in the next section.

Very few of the components come out of the fractional distillation column ready for market. Many of them must be chemically processed to make other fractions. For example, only 40% of distilled crude oil is gasoline; however, gasoline is one of the major products made by oil companies. Rather than continually distilling large quantities of crude oil, oil companies chemically process some other fractions from the distillation column to make gasoline; this processing increases the yield of gasoline from each barrel of crude oil.

In the next section, we'll look at how we chemically process one fraction into another.

You can change one fraction into another by one of three methods:

Cracking takes large hydrocarbons and breaks them into smaller ones.

There are several types of cracking:

After various hydrocarbons are cracked into smaller hydrocarbons, the products go through another fractional distillation column to separate them.

Sometimes, you need to combine smaller hydrocarbons to make larger ones -- this process is called unification. The major unification process is called catalytic reforming and uses a catalyst (platinum, platinum-rhenium mix) to combine low weight naphtha into aromatics, which are used in making chemicals and in blending gasoline. A significant by-product of this reaction is hydrogen gas, which is then either used for hydrocracking or sold.

Sometimes, the structures of molecules in one fraction are rearranged to produce another. Commonly, this is done using a process called alkylation. In alkylation, low molecular weight compounds, such as propylene and butylene, are mixed in the presence of a catalyst such as hydrofluoric acid or sulfuric acid (a by-product from removing impurities from many oil products). The products of alkylation are high octane hydrocarbons, which are used in gasoline blends to reduce knocking (see "What does octane mean?" for details).

Now that we have seen how various fractions are changed, we will discuss the how the fractions are treated and blended to make commercial products.

An oil refinery is a combination of all of these units.

Treating and Blending the Fractions 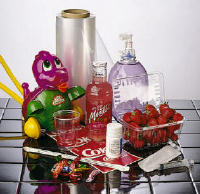 Distillated and chemically processed fractions are treated to remove impurities, such as organic compounds containing sulfur, nitrogen, oxygen, water, dissolved metals and inorganic salts. Treating is usually done by passing the fractions through the following:

After the fractions have been treated, they are cooled and then blended together to make various products, such as:

For more information on the fascinating world of oil refining and petroleum chemistry, check out the links on the next page.