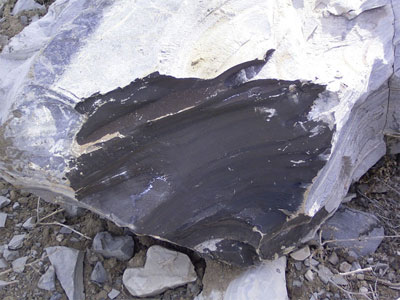 The process of extracting liquid crude oil from the ground is comparatively simple to extracting oil shale. Pressure from gases trapped in the chamber where oil is present force the crude oil to the surface. After this pressure is alleviated, the more difficult secondary and tertiary phases of oil drilling begin. In some cases, water may be pumped in to loosen compressed oil. Sometimes gasses are introduced to repressurize the oil chamber. And in many cases, the remaining oil is simply left for future drilling with more advanced equipment.

Getting crude oil from rock represents perhaps the most difficult process of extraction. Oil shale must be mined using either underground- or surface-mining methods. After excavation, the oil shale must undergo retorting. This is when the mined rock is exposed to the process of pyrolysis — applying extreme heat without the presence of oxygen to a substance, and producing a chemical change. Between 650 and 700 degrees Fahrenheit, the kerogen — the fossil fuel trapped within — begins to liquefy and separate from the rock [source: Argonne National Laboratory]. The oil-like substance that emerges can be further refined into a synthetic crude oil. When oil shale is mined and retorted above ground, the process is called surface retorting.

The problem is that this process adds two extra steps to the conventional extraction process in which liquid oil is simply pumped from the ground. In addition to mining, there's also retorting and refining of the kerogen into synthetic crude. Oil shale presents environmental challenges as well. It takes two barrels of water to produce one barrel of oil shale liquid [source: Argonne National Laboratory]. And without cutting-edge water treatment technology, the water discharge from oil shale refining will increase salinity in surrounding water, poisoning the local area [source: RAND].

There's also the matter of the rocks. Every barrel of oil produced from shale leaves behind about 1.2 to 1.5 tons of rock [source: RAND]. What should be done with this remaining rock? There are certainly projects that require loose rock — like covering ground beneath highway overpasses to discourage homeless settlements. But the demand may not meet the supply if oil shale production is ever conducted on a massive scale.

Royal Dutch Shell Oil Company has come up with an answer to some of the problems with oil shale refining. The company calls it In Situ Conversion Process (ICP) [source: Fortune]. In ICP, the rock remains where it is; it's never excavated from the site. Instead, holes are drilled into an oil shale reserve, and heaters are lowered into the earth. Over the course of two or more years, the shale is slowly heated and the kerogen seeps out. It's collected on-site and pumped to the surface. This cuts out the mining aspect, and further reduces costs since there's no need to transport or dispose of spent rock.

Shell's design includes a freeze wall — essentially, a barrier around the oil shale site where cooled liquids are pumped into the ground. This freezes any groundwater that may enter the site and keeps harmful byproducts like hydrocarbons from seeping out [source: Argonne National Laboratory].

Because of current obstacles, oil shale hasn't been commercially produced on a large scale. Simply put, it's currently more expensive and environmentally harmful than conventional drilling. But as the supply of crude oil diminishes and the price of petroleum rises, oil shale, especially under Shell's plan, is becoming increasingly attractive. Read about some of the positive and negative global consequences of emerging oil shale production next.