Strategic Seed Bombs and Other Considerations 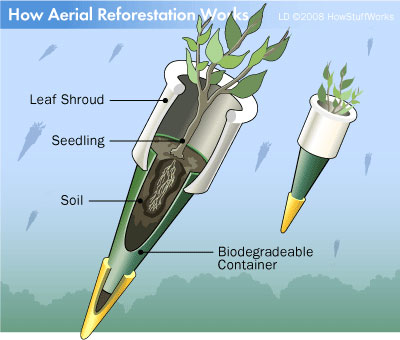 Seed canisters prevent seedlings from being damaged when dropped from a plane, yet decompose soon after to let the trees' roots emerge.
HowStuffWorks

Although you may think aerial reforestation sounds like little more than taking a bag full of seeds up in a plane and dumping them out of the cockpit, it's actually more involved. If seeds were simply tossed out from high elevations without any forethought, you'd be lucky if they even made it to fertile ground.

One thing that plays a large role in aerial reforestation's relative success is the design of the seed packages. In the early stages of aerial reforestation, it was difficult to drop seedlings from high altitudes without damaging their fragile root tips. But now, several different designs exist that encase seedlings in sturdy but biodegradable cone-shaped containers. The containers are strong enough to protect the seedlings when they hit the ground yet still disintegrate to let the trees' roots emerge. They're also packed with everything the seed needs for survival: Depending on the particular design, they may have soil, nutrients, fertilizer and even a material that pulls in surrounding moisture needed for the growing tree.

Even well-built seed canisters won't ensure success without accurate placement, tho­ugh. That's where equipment like the C-130 transport aircraft comes in -- the same equipment used by the military to lay landmines. In the late 1990s, it occurred to some people that although the military wasn't in the business of planting trees, they were pretty skilled at dropping bombs in precise locations and tracking missiles. If that technology were applied to aerial reforestation, they proposed, things might really take off.

One of the proposals was to use high-resolution cameras, attached to a remotely piloted airship, to provide up-to-the-minute data about weather conditions and soil moisture so foresters could predict the best times to schedule a drop. The airship could cruise the skies for up to two years, mapping out locations more hospitable to growth and continually relaying all the information to the ground.

Another idea, designed to achieve more precise placement of the canisters, envisioned outfitting each one with timing and ejection devices similar to the ones currently used in bombs that are dropped in a controlled pattern to destroy runways. In addition, global positioning satellites and missile-tracking equipment could pinpoint exactly where a plane was in relation to the target area. When coupled with wind speed data, that information could determine the precise moment to drop the canisters.

Since all the technologies already exist (there are more than 2,500 C-130 aircraft in 70 countries), it's simply a matter of obtaining funding to get some of these proposals literally off the ground and into the air [source: Brown]. Less technical methods, however, are already up and running.

For instance, while they don't use military aircraft, park officials at Izta-Popo National Park near Mexico City have conducted several airdrops of seed spheroids, (the name for their particular design of seed canister) to reforest the area. The Mexican National Forest Commission has also been testing aerial reforestation with its own version of seed packages to see if they might use it in future projects. In early 2008, about 400 volunteers in Louisiana built their own seed containers by wrapping seeds, sand and soil in gauze dipped in candle wax. The containers were then strategically dropped out of a helicopter along the state's southern coast.

­So while C-130s outfitted with missile-trackers aren't currently plying the skies, some of those more mundane planes you see overhead might just be loaded down with seed bombs. To learn more about aerial reforestation and other land reclamation efforts, try out the links below.