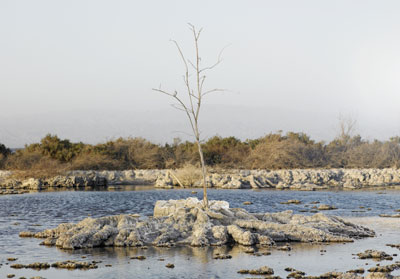 Aerial reforestation could help to replant this wetland, where people would have a difficult time maneuvering.
Siri Stafford/Getty Images

While it's not always militaristic, aerial reforestation has many applications. It's often used by the U.S. Fish and Wildlife Service to increase cover and prevent erosion at a burn site soon after a fire. It's also helpful anywhere that traditional reforestation would be difficult: barren deserts, inaccessible mountain sides, war-ravaged areas and wetlands where people might not be able to find firm footing to plant seedlings.

While it doesn't always have as high of a success rate as manual methods, its effectiveness depends on several factors such as using the right type of seeds, distributing those seeds during the appropriate season and releasing them at the right moment and in the right location. Another issue is predation: the efforts after World War II were stopped because the dropped seeds ended up feeding mice and gophers rather than growing into trees. If it's done right, though, reforestation by air can have a success rate as high as 70 percent [source: Joffe-Block].

Traditional reforestation methods, although more easily controlled than aerial methods, are labor-­intensive, time-consuming and expensive. Planting just 1 acre by hand could cost as much as $3,500 [source: Utomo].

Money matters aside, the quantities of seeds that can be planted using aerial reforestation is astonishing. A large plane could drop as many as 100,000 seeds in one flight, which comes out to about a million trees in just one day [source: MIT]. Even if only 70 percent of those survived, that would still be 700,000 trees -- a pretty successful day. Planting that many trees by hand in one day would require a lot of hands, even at the 95 percent success rate typical of manual planting methods [source: Joffe-Block].

­Of course, all this hypothesizing depends a lot on the methods used. Just like strategy can win or lose a military battle, it could be the key to winning this particular battle as well. In the next section, learn how military technology could be used in a more peaceful way.