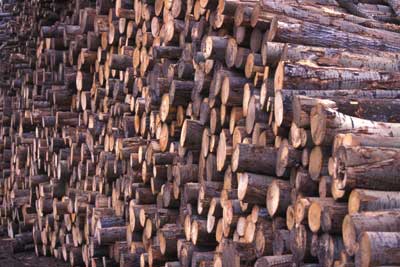 For the most part, human activity is to blame for deforestation, though natural disasters do play a role. So let's take a look at how and why humans deforest areas.

Logging, or cutting down trees in a forest to harvest timber for wood, products or fuel, is a primary driver of deforestation. Logging affects the environment in several ways. Since trucks and large equipment need to get into the forest in order to access trees and transport timber, loggers must clear large areas for roadways. Selective logging -- where only the most valuable trees are felled -- doesn't help matters, as one falling tree can bring down dozens of surrounding trees and thin the forest's protective canopy [source: Butler]. The forest canopy is important to the forest's ecosystem because it houses and protects plant, animal and insect populations. It also protects the forest floor, which slows down soil erosion.

Agriculture also drives deforestaton. Farmers clear the land for crops or for cattle and often will clear acres of land using slash and burn techniques -- cutting down trees and then burning them. Migratory farmers clear a forest area and use it until the soil becomes too degraded for crops. Then they move on and clear a new patch of forest. The abandoned land, if left untouched, will eventually reforest, but it will take many, many years to return to its original state.

Hydroelectric dams are quite controversial because while they help to power communities, they also contribute to deforestation. Damming opponents believe that the building of such structures not only has a negative environmental impact, but it also opens up the area to loggers and more roads [source: Colitt]. To build a hydroelectric dam, acres of land must be flooded, which causes decomposition and release of greenhouse gases. Local people can also be displaced by dam projects, causing further deforestation when these people resettle elsewhere.

Fires, both accidental and intended, destroy acres of forest very quickly. Areas affected by logging are more susceptible to fires due to the number of dried, dead trees. Milder winters and extended warm seasons due to global warming also fuel fires. For example, certain species of beetle that usually die off each winter are now able to survive and continue feeding on trees. This feeding causes the trees to die and dry out, making them into kindling [source: Environmental Defense Fund].

Mining also results in deforestation. Digging a coal, diamond or gold mine requires the removal of all forest cover, not just for the mines but also for trucks and equipment. Recently, Venezuela denied a corporation called Crystallex permission to dig a mine because of environmental concerns [source: Walter and Bailey].

Palm oil has been receiving attention lately for its potential as a biofuel and is used in many packaged foods and beauty products. But palm oil is another cause of deforestation. Its rising prices make it more valuable, and, in response, Indonesian and Malaysian farmers destroy acres of trees to harvest it. For this reason, several countries are currently debating a ban on palm oil as a biofuel.

As cities grow larger to accommodate more people, trees are cut down to make more room for houses and roads. This urban sprawl deforestation is occurring worldwide, now that 50 percent of the world's population lives in cities [source: CNN].

So how does all this deforestation affect us both locally and globally? Read on to find out the negative effects of deforestation.

Did deforestation lead to the steam engine?

As miners needed to go deeper and deeper to retrieve coal, the inefficient steam engine needed to become more efficient. Soon it evolved into the modern steam engine and was the foundation of the Industrial Revolution.