While the greenhouse effect keeps our planet warmer than surrounding space, it also throws the temperature balance out of whack.
Photo courtesy of U.S. DOE

We often hear about the "greenhouse effect" in the negative context of global warming -- it's why the glaciers are melting and climate patterns are undergoing dangerous shifts. But the greenhouse effect is not actually a bad thing in itself -- it's a crucial and positive part of Earth's energy balance. It's what allows Earth to stay warm enough for life to survive. Without it, Earth would feel something like Mars.

You've probably noticed that your car is always much hotter inside than the outside temperature if it's been sitting there for a while. The sun's rays enter through your car's windows. Some of the heat from the sun is absorbed by the seats, the dashboard and the carpeting and floor mats. When those objects release this heat, it doesn't all get out through the windows. Some is reflected back in -- the heat radiated by the seats is a different wavelength than the light of the sun that made it through the windows in the first place, and the window glass won't let as much of that wavelength through. So a certain amount of energy is going in, and less energy is going out. The result is a gradual increase in the temperature inside your car.

Earth's greenhouse effect keeps the planet much warmer than surrounding space. In this article, we'll find out how that happens and see what's involved in maintaining Earth's energy balance. We'll also see what has happened to throw that balance out of whack.

Using the car-in-the-sun example, we can look at Earth's atmosphere as a giant, spherical car window. 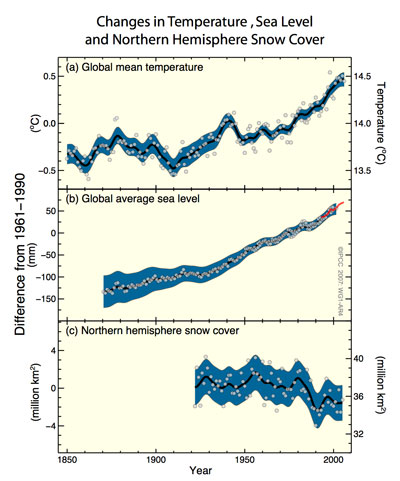 Trapping Too Much Heat

The greenhouse effect is thrown out of balance by too much man-made carbon dioxide.
Image courtesy of Washington State Department of Ecology

In other words, without Earth's atmosphere and the greenhouse effect it provides, we'd be up a creek. But it turns out that an overactive greenhouse effect can result a similarly devastating outcome. With too many heat-absorbing greenhouse gases in the atmosphere, too much radiation gets trapped, causing the Earth to warm beyond its ideal temperature.

Basically, Earth is not able to expel enough heat to keep itself cool, resulting in what's become known as "global warming." It's the greenhouse effect gone wild.

The problem is mostly the increased concentration of carbon dioxide (CO2) in the atmosphere. CO2 (in addition to water vapor) is the most substantial greenhouse gas.

In Earth's natural state, CO2 levels are kept in balance mostly by the activity of plant life. But as humans started burning more and more CO2-releasing fossil fuels, levels have shifted out of balance. We're emitting too much CO2 for the plants to handle (especially with the added effects of deforestation). Before the Industrial Revolution in the late 1700s, the concentration of CO2 in the atmosphere was about 280 parts per million (ppm). In the mid-1900s, that number was 300 ppm, and at the start of the 21st century, we have levels around 360 ppm [source: NASA].

This increase has led to a 1.8 degrees F (1 degree C) increase in Earth's temperature -- which may not seem like a lot until you realize that scientists predict dire, irreversible global effects at a 2 degrees C temperature increase, including melting ice sheets, rising sea levels and accompanying flooding, extreme climate patterns and widespread destruction of wildlife habitat [source: Times].

In agreements like the Kyoto Protocol, the world has begun to take action to try to curb this increased greenhouse effect. It remains to be seen whether these efforts will succeed in averting disaster or will prove to be too little too late.

For more information on the greenhouse effect, global warming and related topics, look over the links on the next page.