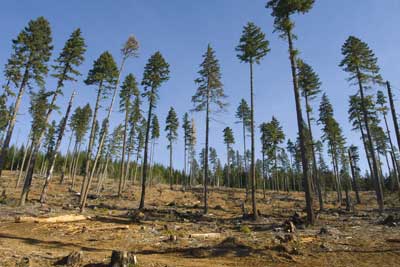 Reduced biodiversity is another deforestation concern. Rainforests, arguably the biggest victims of deforestation, cover only about 7 percent of the world's surface. However, within this 7 percent live almost half of all plant and animal species on earth. Some of these species only live in small specific areas, which makes them especially vulnerable to extinction. As the landscape changes, some plants and animals are simply unable to survive. Species from the tiniest flower to large orangutans are becoming endangered or even extinct. Biologists believe that the key to curing many diseases resides within the biology of these rare plants and animals, and preservation is crucial [source: Lindsey].

Soil erosion, while a natural process, accelerates with deforestation. Trees and plants act as a natural barrier to slow water as it runs off the land. Roots bind the soil and prevent it from washing away. The absence of vegetation causes the topsoil to erode more quickly. It's difficult for plants to grow in the less nutritious soil that remains.

Because trees release water vapor into the atmosphere, fewer trees means less rain, which disrupts the water table (or groundwater level). A lowered water table can be devastating for farmers who can't keep crops alive in such dry soil [source: USA Today].

On the other hand, deforestation can also cause flooding. Coastal vegetation lessens the impact of waves and winds associated with a storm surge. Without this vegetation, coastal villages are susceptible to damaging floods. The 2008 cyclone in Myanmar proved this fact to catastrophic effect. Scientists believe that the removal of coastal mangrove forests over the past decade caused the cyclone to hit with much more force [source: United Nations].

Deforestation also affects indigenous people, both physically and culturally. Because many indigenous people actually have no legal rights to the land on which they live, governments that want to use the forest for profit can actually "evict" them. As these populations leave the rainforest, they also leave their culture behind [source: Plotkin].

On the next page, we'll find out if damage from deforestation is reversible and check out the groups working toward a solution.

What happened at Easter Island?

The most common theory is deforestation. The inhabitants of Easter Island depended on the giant palms that covered the island. They cut down trees for agricultural purposes, fuel and structures. Eventually, the trees just ran out. Once the natural resources were gone, so were the people. When Dutch settlers arrived around 1700, they found an empty and barren landscape.