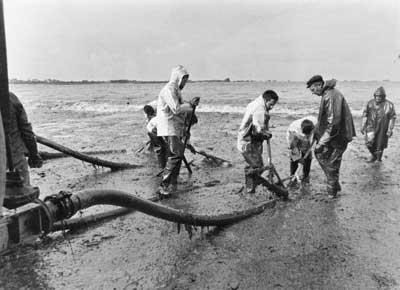 The world's insatiable demand for natural resources indirectly causes much of the damage that humans inflict on the Earth. On this page, you'll learn about two more of these far-reaching catastrophes.

In 1978, more than a decade before anyone had heard of the Exxon Valdez, a tanker named the Amoco Cadiz ruptured its tank on rocks in the English Channel. Before rescue workers could get to it, a storm split the ship, causing its entire load of 68 million gallons (1.6 million barrels) of oil to leak into the waters off the coast of Brittany, France [source: Stevens].

Like the Exxon Valdez spill, the Amoco Cadiz accident was difficult to clean up because of the violent seas. Soon after the tanker split, a dangerous patch of oil and water formed that polluted everything it drifted over. An oil slick 18 miles wide by 80 miles long (29 kilometers wide by 128 kilometers long) contaminated 250 miles (400 kilometers) of coastline and killed 300,000 birds [source: BBC].

Much of the oil worked its way into protected areas in marshes or under sediments where it didn't degrade easily. Scientists on the scene observed entire species wiped out. Bottom-dwelling creatures like urchins and clams suffered "massive mortality," according to a study published by the National Research Council, and the growth rates of several species of fish subsequently slowed. At the time, researchers estimated the ecosystem would not return to pre-spill levels for several decades, and indeed, 20 years later animal populations still showed the effects [source: Stevens, Cedre].

Oil, however, is not behind every toxic spill. On Jan. 30, 2000, the dam restraining contaminated water from a gold mining operation in Romania broke. The 26 million gallons (100 million liters) of polluted liquid and waste contained 55 tons to 110 tons of cyanide and various other heavy metals. The spill travelled through the rivers of Romania, Hungary and Yugoslavia, eventually reaching the major waterway of the Danube River. Both Hungary and Yugoslavia observed massive amounts of dead fish killed by the toxic metals. Hungary reported 1,367 tons of them [source: UNEP/OCHA].

Cyanide is an extremely toxic pollutant that blocks oxygen absorption; fish are almost one thousand times more sensitive to it than people [source: UNEP/OCHA]. Exposure can cause death, reproductive problems and a reduced ability to swim and fight off predators. In addition to the fish killed, plankton also were completely wiped out. However, due to cyanide's short life span, they recovered relatively soon after.

Although cyanide does not remain in the environment for long, the other heavy metals released by the dam do. Zinc, copper, lead and other metals build up in organisms over time and increase in toxicity, posing a long-term threat. For example, copper levels after the accident were at least 1,000 times higher at four different locations tested and lead levels two times to thirty times higher. Each of these metals is toxic to plants [source: UNEP/OCHA].

The spills discussed in this article are just the tip of the iceberg. Countless other environmental disasters, like wars, wildfires and tsunamis, have occurred and continue to occur that don't meet our narrow criteria. To learn more about how these disasters affect the world, look into the links on the following page.