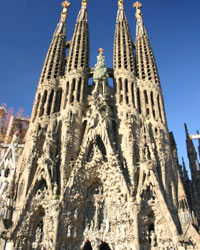 Though Barcelona is a city steeped in history and filled with traditional architecture, the mindset of the city is completely modern when it comes to green living.
©iStockphoto.com/vito elefante

The planning for Barcelona's shining achievement in ecology and urban design, the Eixample District, goes back as far as 1859. The human-centered design of this garden-city oasis, which spans 520 city blocks, continues to grow and change, and to inspire urban planners the world over.

More recently, the city was given an opportunity for an all-over makeover with the 1992 Olympic Games. By building reform into their construction plans, including the strategic placement of Olympic grounds in formerly neglected areas, the early-'90s coastal project came into play simultaneously with revitalization efforts in the inner city.

As well, transportation in and between Spain's major cities has helped to turn the once-deadly air in Barcelona into a standard-setting, continually improving ecological area. It's estimated that by 2020, 90 percent of all Spanish citizens will live within 31 miles (49.9 kilometers) of a high-speed rail station. That will cut down on commutes as well as regular urban and rural traffic, and will tie the whole of the country to its urban hearts. Public buses, both in the cities and outside, run on electric power, bio-diesel and ethanol.

Barcelona's also famous for its recycling initiative, with color-coded and ubiquitous bins everywhere throughout the city. Taking an already successful plan to the next level, planners more recently began streamlining the process by providing corresponding bags to make recycling even easier for its citizens. In 2006, more than one-third of the city's total waste was recycled.