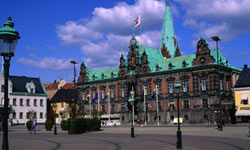 Malmö is home to about 280,000 people, making it the third largest city in Sweden. It lies in the Southern province of Skane and is composed of canals, beaches, parks, harbor and blocks that still retain the look and feel of the Middle Ages. But it's not the Middle Age aesthetic that lands it on this list. Rather, it's Malmö's innovative use of renewable resources and its goal to become a leading eco-city.

Sweden is a leader in green electricity solutions -- most of the country's electricity comes from nuclear and hydropower. Cities such as Malmö are contributing to the greening of Sweden with plans to reduce its carbon dioxide emissions by 25 percent between 2008 and 2012, far exceeding the 5 percent goal set by the Kyoto Protocol.

To help meet this aggressive target, neighborhoods across Malmö are transforming into sustainable, eco-friendly enclaves; of particular note are the areas of Western Harbour, Sege Park and Augustenborg.

Western Harbour, a former shipyard now densely urban, runs on 100-percent renewable energy from sun, wind and hydropower, as well as biofuels generated from organic waste. Its buildings are constructed with sustainable materials and designed to be energy efficient, and its streets are pedestrian and cycle friendly -- 40 percent of commuters and 30 percent of all travelers go by bike [source: PV Upscale].

Additionally, the restoration of the area of Sege Park, another eco-friendly transformation, will power the neighborhood with green energy sources including photovoltaics (solar electricity), wind power and biofuels.

Augustenborg, a district that's been going green over the past decade, is known for its green roofing -- botanical roof gardens that reduce runoff and add insulation and vegetation to an urban neighborhood. Augustenborg is also home to the world's first emissions-free electric street trains, as well as more than a dozen recycling houses processing about 70 percent of collected waste [source: Ekostaden.com].