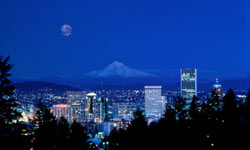 Portland lies on the banks of the Willamette River in the Pacific Northwest and is home to more than 500,000 people. It's been a model of sustainable living for decades, smartly mixing urban and outdoor spaces.

Its greenness is hardly new. Since its 1903 "Report to the Portland Park Board," Portland has been inspiring cities across the United States and the world to embrace green space in their urban planning. Thirty years ago, Portland continued leading the way by demolishing a six-lane highway to develop a waterfront park in its place. Today Portland has roughly 92,000 acres of green space, including 74 miles (119 km) of biking, hiking and running trails, and has enacted an urban-growth boundary to contain the urban landscape and protect 25 million acres of forest and farms [source: Grist].

Portland was the first city in the United States to enact a plan to reduce its greenhouse gas emissions and was a founding member of the Cities for Climate Protection Campaign. It has also held rank at the top of green city lists in the United States and in the world for several years [source: Progressive Policy Institute]. The city has 50 buildings that meet or exceed U.S. Green Building Council standards for sustainability, and its mix of commercial and residential areas is pedestrian and bike friendly -- roughly one-quarter of commuters bike to work [source: Popular Science].

Looking ahead, Portland has set ambitious energy goals. By 2010, the city plans to supply 100 percent of its energy from renewable sources, including innovative approaches such as solar-powered parking meters.