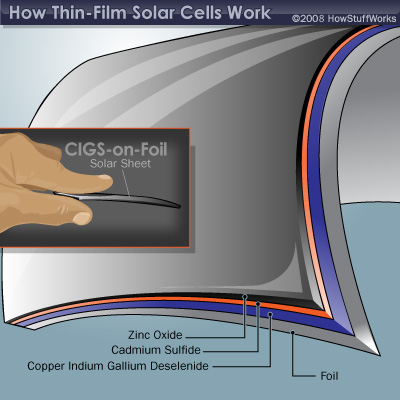 Because structure and function are so closely linked with solar cells, let's take a moment to review how they work. The basic science behind thin-film solar cells is the same as traditional silicon-wafer cells.

A PV cell joins n-type and p-type materials, with a layer in between known as a junction. Even in the absence of light, a small number of electrons move across the junction from the n-type to the p-type semiconductor, producing a small voltage. In the presence of light, photons dislodge a large number of electrons, which flow across the junction to create a current. This current can be used to power electrical devices, from light bulbs to cell phone chargers.

Traditional solar cells use silicon in the n-type and p-type layers. The newest generation of thin-film solar cells uses thin layers of either cadmium telluride (CdTe) or copper indium gallium deselenide (CIGS) instead. One company, Nanosolar, based in San Jose, Calif., has developed a way to make the CIGS material as an ink containing nanoparticles. A nanoparticle is a particle with at least one dimension less than 100 nanometers (one-billionth of a meter, or 1/1,000,000,000 m). Existing as nanoparticles, the four elements self-assemble in a uniform distribution, ensuring that the atomic ratio of the elements is always correct.

The layers that make up the two non-silicon thin film solar cells are shown below. Notice that there are two basic configurations of the CIGS solar cell. The CIGS-on-glass cell requires a layer of molybdenum to create an effective electrode. This extra layer isn't necessary in the CIGS-on-foil cell because the metal foil acts as the electrode. A layer of zinc oxide (ZnO) plays the role of the other electrode in the CIGS cell. Sandwiched in between are two more layers -- the semiconductor material and cadmium sulfide (CdS). These two layers act as the n-type and p-type materials, which are necessary to create a current of electrons.

The CdTe solar cell has a similar structure. One electrode is made from a layer of carbon paste infused with copper, the other from tin oxide (SnO2) or cadmium stannate (Cd2SnO4). The semiconductor in this case is cadmium telluride (CdTe), which, along with cadmium sulfide (CdS), creates the n-type and p-type layers required for the PV cell to function.

There are health concerns with the use of cadmium in thin-film solar cells. Cadmium is a highly toxic substance that, like mercury, can accumulate in food chains. This is a blemish on any technology that fancies itself part of the green revolution. The National Renewable Energy Laboratory and several other agencies and companies are currently investigating cadmium-free thin-film solar cells. Many of these technologies are proving themselves to be just as efficient as those that require cadmium.

So how are these next-generation solar cells manufactured? Read on and find out. ­