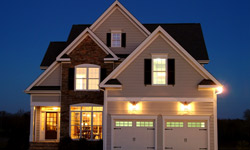 The energy we use is usually measured in kilowatt-hours (kWh); 1 kWh is equal to 1,000 watts working for one hour. In 2001, the entire world consumed 13.9 trillion kilowatt-hours (kWh) of electricity [source: Clean-Energy]. Of that global 13.9 trillion kWh, 25 percent (3.45 trillion kWh) powered electrical devices in the United States [source: IndexMundi]. And of that 3.45 trillion kWh, 1.14 trillion were used in households [source: EIA]. That's more than 30 percent of U.S. electricity going to power homes, which is more than either the commercial or the industrial sector uses [source: EIA].

Why the huge glut of energy consumption in the residential sector? Simple: Home appliances draw extreme amounts of energy. An appliance rated at 1,000 watts, left on for one hour, will use 1 kWh of electricity. Now think about all the appliances -- large and small -- you have in your home.

Over the last 30 years, the efficiency of many appliances has increased dramatically. A refrigerator manufactured in 1979 consumed between 120 and 300 kWh per month; in a post-2001 unit, that monthly range is down to 31 to 64 kWh [source: Hawaiian Electric]. But still, refrigerators are a big draw on the energy supply. And they're not alone.

Small appliances like toasters, hair dryers, coffee makers, vacuum cleaners and curling irons all use more watts than refrigerators do. Ranges and dishwashers do, too (you've probably noticed a trend -- producing heat takes lots of watts). But these big-watt items are only on for short periods of time, so they don't use as much power as an appliance that draws fewer watts but works indefinitely -- like a fridge/freezer or a water heater.

So for the biggest energy hogs in the home, we're left with the household appliances that we leave running for hours -- or days -- at a time. In this article, we'll take a look at five of the most energy-hungry appliances in our homes.

No. 5 on the list is refrigerator/freezers. Despite their huge efficiency jump in the last few decades, they still rank high in energy use. 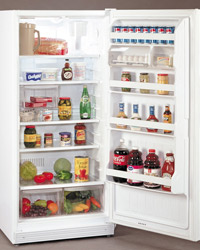 Check your fridge for a power-saver switch. If you don't notice condensation after you switch it off, you might not need the feature.
Photo courtesy of U.S. CPSC

Refrigerators are the top-consuming kitchen appliance in U.S. households, and separate freezers are next on the list [source: DOE]. The approximate energy range is 30-200 kWh/month [source: Hawaiian Electric].

That's the thing about energy ratings for any particular appliance: The range is vast. Lots of people still have fridges from the 1980s (or even earlier), which means they're still using in the thousands of kWh every year. If you have a brand new high-efficiency unit, your consumption could be more like 400 kWh/year. And then there are all the other factors: model size, freezer orientation (bottom freezers are more efficient), temperature settings, device placement, refrigeration habits and any available energy-saving modes (more on these in a moment).

Regardless of which model you have, there are steps you can take to reduce its energy use (although if your refrigerator/freezer is more than 15 years old, the most important change is to buy a new one if you can afford it, since efficiency values have increased so dramatically):

Up next: Low humidity, high watts. 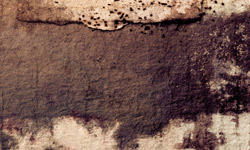 Humid basements may need dehumidifiers to stave off mold and mildew, but you can probably keep your machine at a relatively low setting.
iStockphoto.com/ Bluberries

If you live in a dry region, you may not be very familiar with the dehumidifier. It's an appliance that removes moisture from the air. In very humid, wet areas, like South Florida or the U.S. Northwest, this can be crucial for health reasons, since too much water vapor in the air can cause mold to grow and can make a cozy environment for dust mites. It can also cause damage to belongings placed in storage.

Lots of people leave dehumidifiers running all the time. That's why they're such a huge power consumer: It's a high-wattage appliance that runs for long periods of time. A dehumidifier comes in at anywhere from 60 to 1,000 watts, depending on capacity, with an average somewhere around 785 [source: Energy Savers]. Using a dehumidifier might consume 160 kWh/month, which is probably more than your refrigerator uses [source: CPPD].

Of course, how much energy a dehumidifier actually uses depends on how long it runs and where its humidity level is set. To make sure your appliance isn't wasting energy:

Up next: Hot showers, high bills.

According to the U.S. Department of Energy, heating water is responsible for 12 percent of U.S. home energy use. We use the water heater in so many applications: showers, cleaning dishes, cleaning clothes -- it's a pretty ubiquitous part of our daily routine. And at an average consumption of 400 kWh per month, it's also a power-intensive one.

Of course, the actual amount of energy you spend on hot water depends on a lot of factors, including the type (standard, solar, tankless) and size of your water heater, what temperature it's set at, how long you shower for and whether you wash your clothes in cold or hot water. But no matter what model you have and what your hot-water habits are, you can do a few things to help your water heater perform more efficiently:

How do you compare?

In 1980, 27 percent of homes in the United States had central air conditioning; in 2001, that number jumped to 55 percent [source: EIA]. Air conditioning, which typically uses high-watt machines for extended periods of time, accounts for a big chunk of residential energy use.

As usual, the actual number of watts consumed in cooling a home varies greatly depending on the type of unit, the capacity, the time it's operating and the efficiency rating. An air-conditioning unit might use anywhere from 200 to 1,800 kWh/month. Here's a rough breakdown of what different AC devices use:

You can take some important steps to improve the efficiency of an air conditioner, including:

You can also upgrade to a more efficient model or, on the other end of the spectrum, decide a little sweat might not be so bad for you after all.

Up next: More warmth, more watts.

Determine how many kWh per day an appliance uses with this formula:

You can find the wattage on the nameplate.

Or, just buy a watt meter like Kill A Watt. 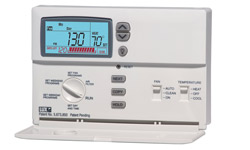 To save energy, upgrade to a programmable thermostat.
Photo courtesy of Energy Star

A home heating system is one of hungriest home appliances. It's also arguably the most necessary one.

The kWh range for heating devices is extremely broad, running from a measly 100 kWh per month to a shocking 3,500 kWh/month [source: MCEC] (if you live in a cold region, you've probably been shocked by your heating bill more than once). It all depends on which type of heat you use and how efficient your particular model is. Here are some approximate numbers for various systems:

Other factors include where you set the thermostat and whether you have a programmable thermostat to cut back on wasted heat. Upgrading to a more efficient heating unit is the best way to reduce your heat-related energy use -- there are furnaces out there that operate at 97 percent efficiency, while your model may only be 78 percent efficient [source: Peterson]. Short of an expensive upgrade, you can also help your system work more efficiently and lower your kWh if you:

And perhaps the best new habit to embrace: If you're feeling a bit cold, put on a sweatshirt.

For more information on appliance efficiency and related topics, look over the links on the next page.